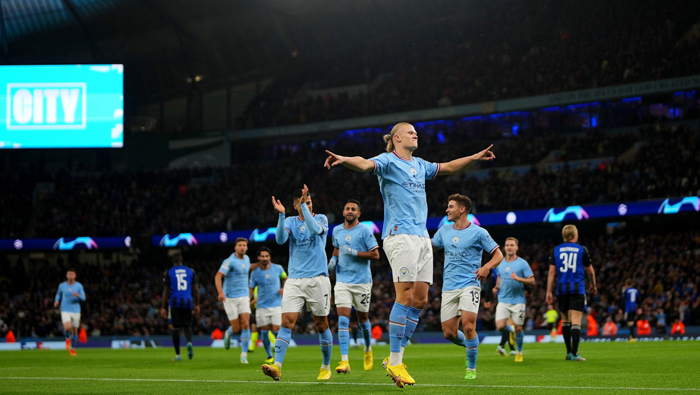 Manchester : Erling Haaland found the net again and continued his rich vein of form as Manchester City steamrolled Southhampton 4-0 to win its home match at the Etihad Stadium on Saturday.

Before Phil Foden scored his sixth goal in three games, Joao Cancelo put the champs on the right path to a comfortable victory. Early in the second half, Riyad Mahrez added a third goal before Haaland added his customary fourth. In addition to Haaland, who attempted to score a fourth consecutive home hat trick in the league but was forced to settle for just one this time, Southampton had the unenviable chore of attempting to contain a City team that had scored 20 goals in the previous five games across all competitions.

“The result is good, we play quite good. We struggled to break their high pressing. Last season we suffered a lot against them but today we were much better,” City boss Pep Guardiola said as quoted ESPN.

“Some players were not at their best but we create a lot of chances. We were solid. It was a good game. For a long time, Phil Foden is playing really good. The impact from him is great. Erling Haaland had the chances again. He scored a brilliant goal. It’s an incredible weapon for us, a big threat. I am so satisfied. We will see the result from Arsenal and Liverpool, always in Premier League there are good games. Being close to the top of the league is important going into the World Cup,” said the coach.

Within the first fifteen minutes, Haaland hit the post before Cancelo, who had a great solo run, gave City the lead. On the 32nd minute, Foden doubled the lead by chipping the ball over Gavin Bazunu despite being given far too much space.

Southampton only trailed by two goals at the interval, but four minutes into the second half, when City began to seize control, the deficit grew. In the first week of October, City scored its 44th goal of the year thanks to Mahrez’s volley after receiving a feed from Rodri.

Guardiola substituted Foden after the game was already won, but the Etihad crowd watched eagerly as Haaland did not score the goal. However, they did not need to worry because he eventually scored on minute 65, giving him 20 for the year.

Southampton boss Ralph Hasenhuttl said, “The quality you are facing, this is what I was expecting. They changed their shape and we had more problems today pressing them high. They showed the difference between these two teams. I am not unhappy with the effort and bravery we showed. Not with the ball though, we played too risky. The problems in the first half came after losing the ball in possession.”

Manchester City are on top of the English Premier League with 23 points with Arsenal close second, trailing with 21 points.