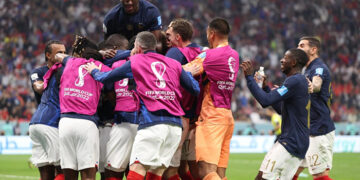 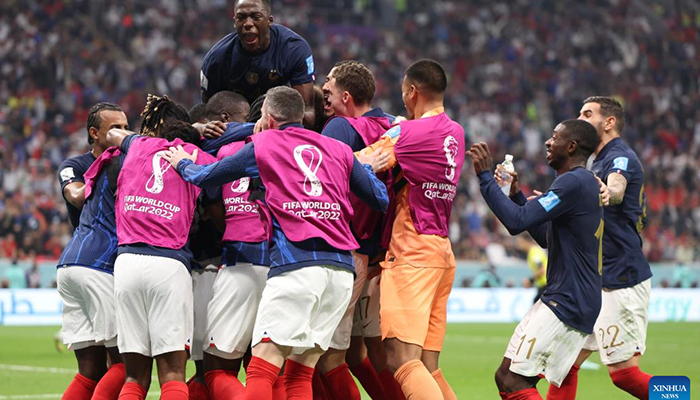 Al Khor : Theo Hernandez and Randal Kolo Muani’s goals guide defending champions France to a 2-0 win over Morocco in the semi-final being played here at the Al Bayt Stadium and set up a final clash with two-time champions Argentina in the FIFA World Cup 2022.
France started off aggressively as in the fifth minute Antoine Griezmann’s assist helped Kylian Mbappe take a left-footed shot from the centre of the box but it was blocked.

Theo Hernandez’s left footed shot from the left side of the six yard box went on to hit the bottom left corner giving the 2018 champions a 1-0 lead in the fifth minute of the match.

Morocco weren’t too far behind as Noussair Mazraoui’s assist helped Azzedine Ounahi’s right-footed attempt from outside the box was saved in the bottom right corner.

In the 11th minute, Antoine Griezmann tries a through ball, but Kylian Mbappe was caught offside.
In the 17th minute, Achraf Hakimi’s right-footed shot from outside the box was blocked coming from Selim Amallah’s assist. Ten minutes later Sofiane Boufal of Morocco was shown a yellow card for a bad foul.

In the 31st minute, Sofiane Boufal tried a through ball for Morocco but Noussair Mazraoui was caught offside.
Two minutes later Kylian Mbappe’s assisted Aurelien Tchouameni of France’s right-footed shot from outside the box was blocked.
There were numerous attempts made by the defending champions France but they could not double their lead going into half-time with a solitary goal lead.
In the second half too France came with the same intent as in the 47th minute as Kylian Mbappe’s assist helped Jules Kounde take a right-footed shot from outside the box but it was blocked.

It was in the 79th minute when the defending champions were rewarded as Randal Kolo Muani of France came up with a right-footed shot from very close range to the bottom right corner.

In injury time Morocco pressed hard but failed to get any success as France won the second semi-final with a convincing 2-0 margin. France will now lock horns against Lionel Messi’s Argentina in the final.
France had much lesser possession of 39 per cent in comparison to Morocco who had 61 per cent while both teams had the same number of shots on target of three each.