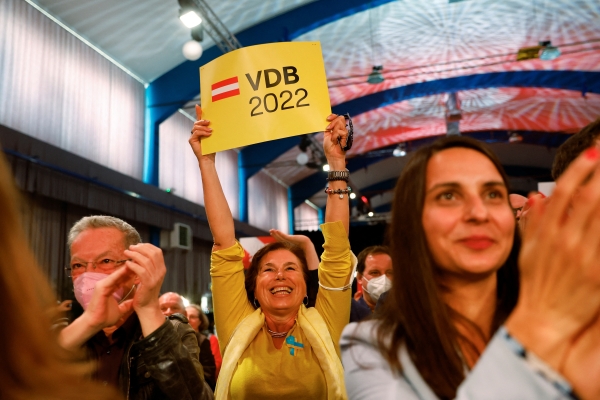 VIENNA: Austrian President Alexander Van der Bellen has been re-elected, projections showed on Sunday, after campaigning on promises of stability as the Alpine country struggles with an energy crisis and inflation.

The projections showed the 78-year-old incumbent swept 54.6 per cent of the votes with six other candidates — all men — lagging far behind. The final official result is not expected until Monday.

Campaigning on a slogan of “clarity” and “stability”, Van der Bellen had been widely tipped to clinch a second mandate.

“It would be nice if we had clarity today,” the economics professor said after casting his ballot in central Vienna earlier on Sunday.

“Nice for Austria, nice for us — if we can then fully concentrate on the diverse tasks ahead, the multitude of crises… that we in Austria, in Europe, are facing.”

Polls ahead of the election had suggested the pro-European liberal would secure more than 50 per cent of the vote, thus avoiding a run-off. Some 6.4 million people were eligible to cast their ballots from the European Union country’s total population of nine million.

The presidential post, which has a term of six years, is largely ceremonial.

“I am in favour of consistency,” 73-year-old retiree Monika Gregor said outside a Vienna polling station earlier on Sunday, saying she had voted for Van der Bellen and thought he was “very clever”. Posters proclaim the former Greens leader to be “the safe choice in stormy times” as the ripple effects of Russia’s invasion of Ukraine push up inflation throughout Europe.

Van der Bellen was running again as an independent, but he has the explicit or implicit backing of Austria’s major parties except the far-right Freedom Party (FPOe).

The latter has fielded its own candidate, Walter Rosenkranz who, according to the projections, got 18.9 per cent.

Also standing for the presidency was 35-year-old punk rocker Dominik Wlazny, founder of the Beer Party, named for its advocacy of the popular beverage. He came in fourth place with 8.1 per cent, according to the projections. Alexander Nittmann, 35, a software developer, said he had voted for Wlazny, hoping he would bring “a breath of fresh air”. — AFP