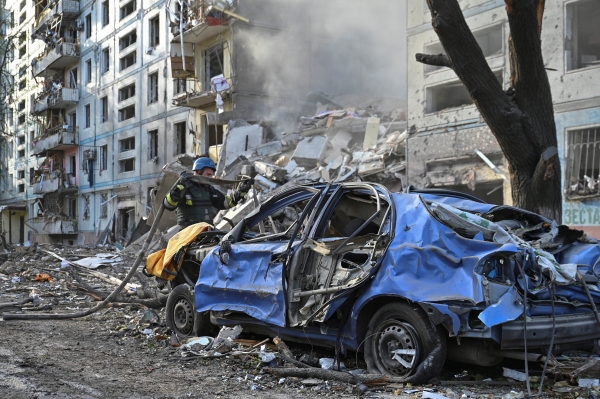 KYIV: A Russian missile attack early on Sunday struck an apartment block and other residential buildings in Ukraine’s southeastern city of Zaporizhzhia, killing at least 13 people and wounding 87 others, including 10 children, Ukrainian officials said.

Rail services and partial road traffic meanwhile resumed a day after a powerful blast damaged a bridge linking Russia to Crimea that is a key supply route to Moscow’s forces battling in southern Ukraine and an imposing symbol of its annexation of the peninsula.

Saturday’s explosion on the bridge over the Kerch Strait prompted gleeful messages from Ukrainian officials but no claim of responsibility. Russia did not immediately assign blame for the blast, which images showed blew away half of a section of the bridge’s roadway, with the other half still attached.

The pre-dawn fusillade in Zaporizhzhia on Sunday was the second of its kind against the city in three days.

At least 13 people died and 87 others were wounded, 60 of whom were hospitalised, regional officials said. The wounded included 10 children.

Ukrainian President Volodymyr Zelensky condemned the attack as “absolute evil” by people he called “savages and terrorists”, vowing those responsible would be brought to justice.

Zaporizhzhia city, about 52 km from a Russian-held nuclear power plant, has been under frequent shelling in recent weeks, with 19 people killed on Thursday.

Emergency workers and firefighters cordoned off the nine-storey building and dug for survivors and casualties in the smouldering rubble of a massive central section that had collapsed.

Most of the Zaporizhzhia region, including the nuclear plant, have been under Russian control since the early days of Russia’s attack in February. The capital of the region, Zaporizhzhia city, remains under Ukrainian control.

“The situation is manageable – it’s unpleasant, but not fatal,” Crimea’s Russian governor, Sergei Aksyonov, told reporters. “Of course, emotions have been triggered and there is a healthy desire to seek revenge.”

Russia’s transport ministry said freight trains and long-distance passenger trains across the bridge were running according to schedule on Sunday. Limited road traffic resumed on Saturday around 10 hours after the blast. — Reuters