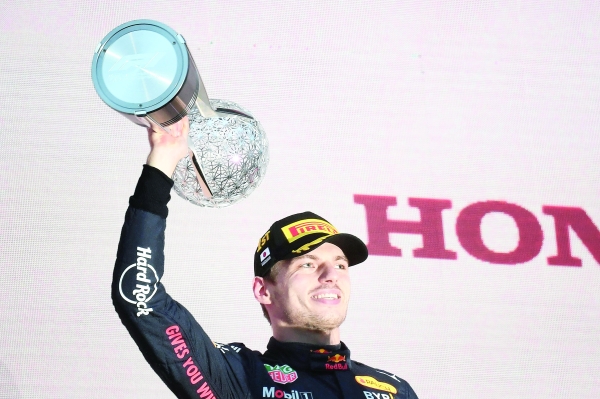 Suzuka, Japan: Max Verstappen said he was capable of dominating Formula One for years to come after clinching his second straight world title at the Japanese Grand Prix on Sunday.

The Red Bull driver won a dramatic, rain-shortened race in Suzuka and claimed the championship when his nearest rival Charles Leclerc was relegated to third by a five-second penalty.

The flying Dutchman said it was a “crazy feeling” to lift the trophy for a second time — then set his sights on ruling the sport for years to come.

“If I have a competitive car, I’m confident that we can keep this going,” said the 25-year-old, who has won 12 of 18 races this season.

“It also depends on what the competition is going to come up with. I really believe in this group and I really hope that in the coming years we can enjoy a lot more wins and potentially of course championships.”

Verstappen was only informed he had retained his title midway through the post-race TV interview, and even the driver himself was not sure.

Ferrari’s Leclerc crossed the line second in front of Red Bull’s Sergio Perez, but he was hit with a penalty after squeezing Perez in the final chicane and being deemed to have gained an advantage by leaving the track.

“I made a mistake and tried to minimise it,” said Leclerc, who led the championship early in the season. “Huge congratulations to Max and Red Bull. Max has been incredible and it’s a title fully deserved.”

The amended result gave Verstappen an unassailable 113-point lead over Perez and made him only the third driver after Michael Schumacher and Sebastian Vettel to clinch the title with four races to spare.

“I was told I was the world champion, we celebrated and then people told me ‘no, you’re still missing a point’,” he said of the post-race confusion.

“Eventually we had enough points so we were world champion again.”

The Japanese Grand Prix was staged for the first time since 2019 because of the pandemic, but the race got off to a chaotic start in heavy rain.

Leclerc was quicker off the line than pole sitter Verstappen, who admitted he made “a terrible start”, before the Dutchman regained the lead with a brave overtake around the outside of turn one.

“It was very close but that’s what people like to see,” he said.

Ferrari’s Carlos Sainz spun out on the first lap and the Williams of Alex Albon broke down prompting a safety car.

A red flag soon followed and forced the drivers back to the pit lane for almost two hours.

Verstappen resumed on a rolling start ahead of Leclerc and Perez and extended his lead with ease once the safety car dived back into the pits and track conditions began to improve.

“Congratulations to Max, he’s done exactly the job he needed to do to win his second title,” said seven-time world champion Lewis Hamilton, who Verstappen pipped to the championship a year ago in controversial circumstances.

Verstappen was 46 points behind Leclerc after three races but went on to dominate, winning 11 of the next 15 Grands Prix. And he is hungry for more.

“I still want to try to win more races because with the car that we have now, you have to try to take advantage of that because you don’t know if you’re ever going to have that again in the years to come,” he said.

Red Bull team principal Christian Horner paid tribute. “Carrying that number one this year, he’s done it with a lot of pride,” he said.

French driver Pierre Gasly reacted furiously after a frightening moment when he nearly hit a tractor on the track in rain and poor visibility early in the race.

AlphaTauri’s Gasly said he could have been killed by the vehicle, which was deployed to recover Sainz’s car.

It brought back painful memories of the tragic 2014 race at Suzuka, when another French driver Jules Bianchi died after colliding with a recovery vehicle in poor conditions.–AFP