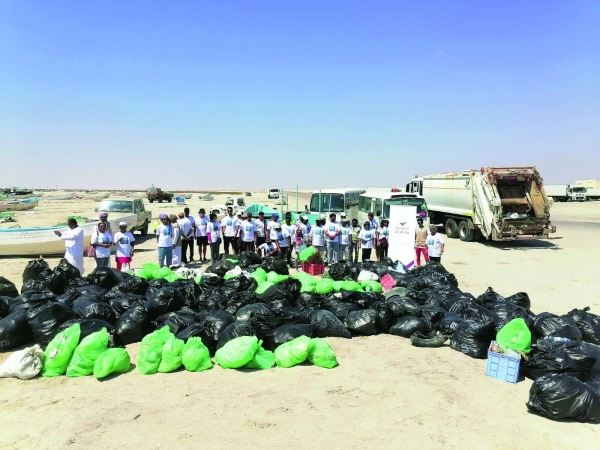 A group of volunteers removed tonnes of waste from Filam beach in Mahout and Shanna Port during a two-day cleaning drive in three sessions.

The volunteers of Save Oman Beaches did the daunting task of massive cleaning during the weekend. The collected debris included oil cans used for fishing boats, plastic bottles and caps, dead fish and tortoises, fishing nets and many other plastic and non-plastic materials left at both places.

“Waste materials, mostly plastic, which is harmful to our environment, were removed from the beaches in and around Mahout over the last two days, thanks to all volunteers,” said Ammujam Raveendran, founder of the volunteer group, Save Oman Beaches.

“It could be anything between 14 and 15 tonnes because some bags were easily more than 80 to 100 kgs each. And to have 138 bags of such size at one location (less than 150 metres of nearly 1km stretch). It is shocking to see the quantity of waste caused by us humans,” she added.

The Environment Authority, the Ministry of Agriculture, Fisheries and Water Resources (MoAFWR) supported the campaign, which Al Ahlia Insurance sponsored. It also had support from Mahout Municipality and Beah. Some 50 volunteers from different walks of life participated in the clean-up drive.

“Kudos to the team, those ministries which took part, and Al Ahlia Insurance for their support. It was a wonderful experience to have helped our environment breathe by removing nearly 14 tonnes of trash,” a participant volunteer said.

“Happy to be one of the ants that moved this mountain. May peace and love for green sustain on earth. It was such a wonderful event. Thanks to the entire team, and it was great teamwork,” another participant said.

These waste would have choked many sea creatures to death and plants to perish. It had turned the area into a breeding ground for pests, insects and other carriers of diseases.

“At Filam beach, the trash removed seems to be brought in during high tide, unlike other beaches where it is majorly part of picnics or fishing activities. Thanks to all the participants for this amazing weekend on the beaches in and around Mahout. We thank the Environment Authority and the Ministry of Agriculture, Fisheries and Water Resources (MoAFWR) for consistent support and Al Ahlia Insurance for believing in our efforts,” said Ammujam.