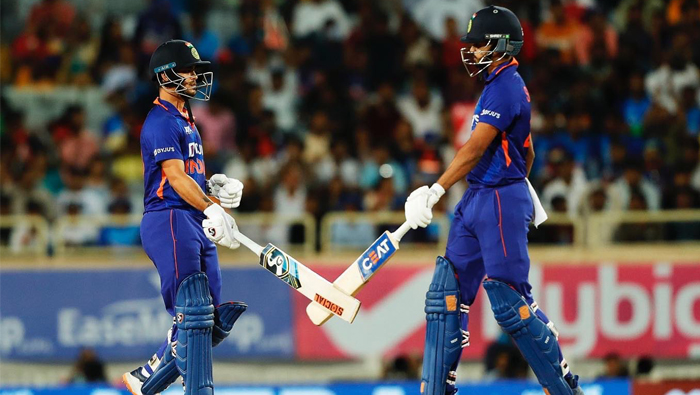 Chasing a tricky 279-run target India did not get the ideal start losing their skipper Shikhar Dhawan for 13 as the hosts lost their first wicket for 28. Left-arm pacer Wayne Parnell cleaned him up. Opener Shubman Gill looked in good touch hitting boundaries but he too was dismissed for 28 off 26 by Kagiso Rabada caught and bowled.

At 48/2 India needed a partnership and Shreyas Iyer and Ishan Kishan did just that. Team India crossed the 50-run mark in 9.1 overs.

The Iyer-Kishan duo batted sensibly to strike a 50-run partnership off 70 balls and in the process crossed the triple-figure mark in 20.3 overs.

Sanju Samson then joined Shreyas Iyer as the duo took India’s total beyond the 250-run mark in 42.1 overs. Shreyas Iyer went on to score his second ODI ton off 103 balls and also crossed his previous best score of 103.

The iyer-Samson duo crossed the 50-run mark off 51 balls as the hosts inched closer to victory. Shreyas Iyer went on to hit the winning runs to help India chase down the target in 45.5 overs and level the three-match series 1-1.

Earlier in the day South African captain Keshav Maharaj won the toss and was elected to bat first in the second ODI.

South Africa made three changes while India made two. Temba Bavuma and Tabraiz Shamsi were replaced by Bjorn Fortuin and Reeza Hendricks, while Anrich Nortje came in for Lungi Ngidi. India brought in Shahbaz Ahmed, who made his debut, and Washington Sundar with Ravi Bishnoi and Ruturaj Gaikwad sitting out.

South Africa started the innings cautiously with the new ball seaming around. Mohammad Siraj opened with the new ball for India and had a massive appeal against Quinton de Cock when the left-hander was beaten on an inswinger in the very first over.

The ace pacer had the last laugh though as he dismissed de Cock in the third over to send him packing for the pavilion for a paltry score of five runs. The batter dragged an outside off delivery onto the stumps.

Janneman Malan then played a few eye-pleasing shots to take the South African inning forward. The batter looked set to play a long innings but was sent back by debutant Shahbaz Ahmed giving him his maiden ODI wicket. Malan missed the spinning ball to be struck on the pad. India took a review after the umpire denied the appeal, but the decision was overturned. South Africa finished at 40-2 after the end of the 10 overs.

Aiden Markram then joined Reeza Hendricks at the crease, the duo then steered the South Africa innings to take them past the 150-mark.

The batting duo looked dangerous as they looked to run away with the game, as they brought up their century stand. Indian captain Shikhar Dhawan then brought back Siraj in the 32nd over, a move which worked wonders for the team.

Hendricks was looking to up the ante but was caught at the boundary after failing to connect the ball sweetly. Shahbaz Ahmed gobbled up the catch at the deep square leg boundary to send back the batter for a score of 76 runs of 79 balls.

Heinrich Klaasen was the next batter who occupied the crease with Markram and shared a quick-fire partnership of 46 runs from 40 balls, with Klassen blasting two fours and two sixes in the partnership while Markram also sent the ball to the boundary a few times.

Klassen was dismissed by Kuldeep Yadav after the batter tried to clear the boundary at long-on but failed to do so with Siraj completing an excellent running catch. The batter was dismissed for 30 runs off 26 balls.

India struck again in the next over as Washington Sundar dismissed the well-set Markram for 79 runs. The batter was unlucky to be dismissed off a not-so-brilliant ball, as he failed to keep down the ball at extra cover. Shikhar Dhawan completed the catch to give India its fifth wicket.

David Miller and Wayne Parnell were at the crease for the Proteas at the end of 40 overs with the team’s total at 221-5, looking to capitalize on the platform laid by the previous batters.

Both the batters looked to make a late flourish but the Indian bowlers bowled to their plans, keeping the visitors in check. The scoreboard pressure kept building as the Protea batters failed to find the boundaries.

Shardul Thakur bowled brilliantly, mixing his deliveries to create pressure and dismiss Parnell at long-off. The batter looked to break the shackles but was unable to clear the boundary, handing Shreyas Iyer a simple catch. His scratchy innings ended at a score of 16 off 22 balls.

Mohammed Siraj was the pick of the bowlers as he took three wickets for 38 runs.