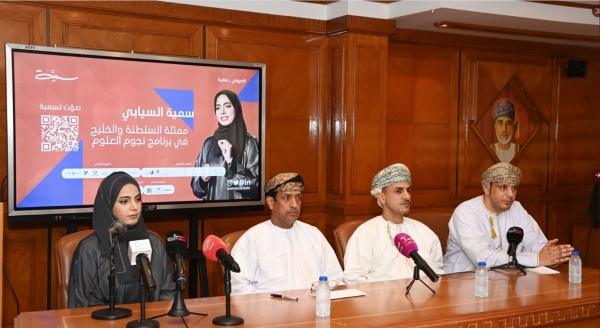 Muscat: Omani innovator Sumaya Said al Seyabi will join the final qualifiers for the 14th edition of the “Stars of Science” programme, organized by Qatar Foundation for Education, Science and Community Development. She will participate with an environment-based project titled “Bio-analysis of microplastics from a perspective of biology and nanotechnology”.

In a press conference held at the Ministry of Information on Monday, Sumaya encouraged the audience to vote for her via the programme’s website(https://www.starsofscience.com/voting/voting.php).

She pointed out that audience voting comprises 50% of the score of the contest due to be held on October 13, 2022, while the rest of the score will be decided by the jury.

Sumaya said that her innovation provides a promising solution for environment pollution, since it introduces safe ways of neutralizing microplastics.

Sumaya said that her access to final stage followed tough competition, which shows that Omani innovators command capabilities over their fields of specialty. She expressed her wish to get the honour of raising Omani flag during international events.

Mohammed Said al Balushi, Undersecretary of the Ministry of Information, said that, since the Omani innovator’s project has a potential of protecting the aquatic environment and marine organisms, it has become incumbent upon us to lend her support through the electronic website of the contest programme.

Dr Abdullah Ali al Amri, Chairman of the Environment Authority, stressed the need to support the Omani innovator’s scientific innovation which, he said, will contribute to the service of mankind. A recent survey was conducted on specimens of elements from Omani ports to check their levels of safety, with special attention accorded to organic and non-organic pollutants, he explained.

The Star of Science is a leading contest in the Arab world and it focuses on innovation and encourages regional entrepreneurs in interested in the fields of science and technology.