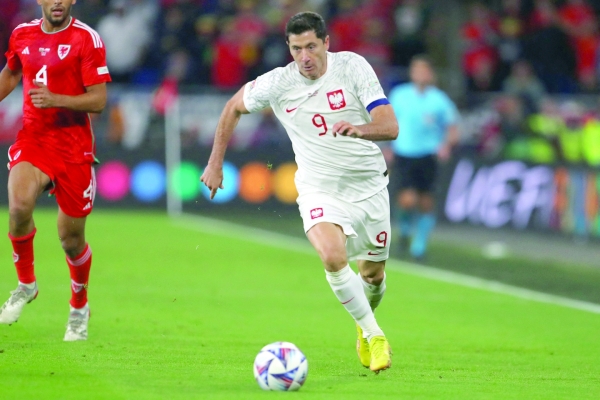 GDANSK, Poland: Poland will need to look beyond leading striker Robert Lewandowski if they are to break their group stage jinx and reach the knockout rounds at the World Cup in Qatar.

Poland, who have been drawn in Group C alongside Argentina, Mexico and Saudi Arabia, last made the knockout phase in 1986.

Poland’s best performance at a tournament in the last decade was at Euro 2016, where they reached the knockout stages from a group containing Ukraine, Northern Ireland and Germany.

They beat Switzerland in the last 16 before being eliminated by eventual champions Portugal in the quarters, but their two most recent major tournaments, the 2018 World Cup and Euro 2020, were disappointing as they finished bottom of their groups.

The good news for coach Czeslaw Michniewicz is that he has quality players at his disposal. The bad news is that he is still struggling to get a tune out of them ahead of his first World Cup.

The Polish FA bet on Michniewicz to lead the team at the World Cup after he excelled during his three years in charge of the country’s under-21 side.

But the 52-year-old, who has never coached outside Poland, has struggled to get the most from talisman Lewandowski, who has appeared isolated when deployed as a lone striker in Michniewicz’s system.

Poland have three wins, three defeats and two draws under Michniewicz, a run in which Lewandowski has only managed two goals.

The Barcelona forward, one of the most feared strikers in world football, has said he would prefer to play alongside another striker, and Poland’s hopes rest on him replicating his club form for his country.

If Michniewicz gives in and plays with two strikers in Qatar, Charlotte FC’s Karol Swiderski — who has scored seven goals in his last 12 games for Poland — and Juventus striker Arkadiusz Milik will fight it out to be Lewandowski’s foil.

Lewandowski and Milik formed a potent partnership for Poland in years past before a string of injuries derailed the latter, even ruling him out of the last Euros.

“I’m very happy that (Milik) has revived at his new club,” Lewandowski said. “With (Milik) playing and being in form, and me looking good too, this could be a big benefit for the national team.”

Beyond the forward line, the form of Napoli midfielder Piotr Zielinski will also be crucial to Poland’s success.

The 28-year-old, who has played more minutes under Michniewicz than any other Poland player, is a creative force with the passing ability to unlock defences.

Goalkeeper Wojciech Szczesny is a steady presence behind a back line that includes experienced Benevento defender Kamil Glik and Aston Villa’s Jan Bednarek.

Getting out of their group in Qatar would be considered a success for Poland, but a lot still depends on the team coming together under their new coach. — Reuters