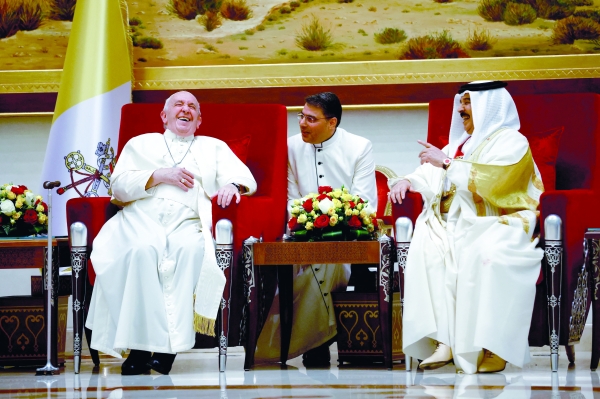 AWALI: Pope Francis, leader of the world’s 1.3 billion Catholics, landed on Thursday in Bahrain on a trip aimed at fostering dialogue between Christians and Muslims.

The first papal visit to the island nation is his pontiff’s second voyage as pope to the Arabian peninsula, after a 2019 trip to the United Arab Emirates also aimed at inter-faith outreach.

During his trip, which lasts until Sunday, he will meet Bahrain’s king, hold an open-air mass and lead a prayer for peace at a vast modern cathedral opened last year.

As he left Rome on Thursday morning, the 85-year-old Francis, who suffers from recurring knee pain, was escorted in a wheelchair to the plane.

The flight arrived in the afternoon in Bahrain, and Francis made “courtesy visit” to King Hamad bin Isa al Khalifa following a welcoming ceremony.

He will then give a speech to authorities, diplomats and members of civil society, according to his official schedule.

On Friday, Francis will address the “Bahrain Dialogue Forum: East and West for Human Coexistence”, organised by the UAE-based Muslim Council of Elders.

Afterwards, he will hold a private meeting with Shaikh Ahmed al Tayeb, grand imam of the prestigious Cairo-based Al Azhar.

The Argentine pope has made outreach to Muslim communities a priority during his papacy, visiting major Muslim countries such as Egypt, Turkey and Iraq, and most recently in September, Kazakhstan.

On Tuesday, Francis asked the faithful assembled on Saint Peter’s Square to pray for his upcoming trip, calling it “a journey under the banner of dialogue”.

Friday’s “prayer for peace” will be held at the cavernous Our Lady of Arabia Cathedral in Awali, which seats more than 2,000 people and opened in December. It was built to serve Bahrain’s approximately 80,000 Catholics, mainly workers from southern Asia, including India and the Philippines.

On Saturday, Francis will lead mass at Bahrain’s national stadium before a crowd of nearly 30,000 people, where workers on Wednesday were adding finishing touches, including a giant gold cross above Francis’ chair.

About 2,000 spots will be saved for Catholics arriving from Saudi Arabia, Bishop Paul Hinder, the apostolic administrator for the vicariate of Northern Arabia, told Vatican News.

Francis will preside over a prayer meeting with Catholic clergy and others on Sunday before returning to Rome. — AFP