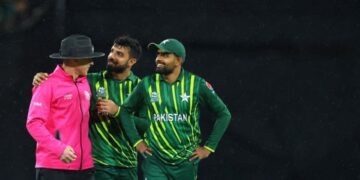 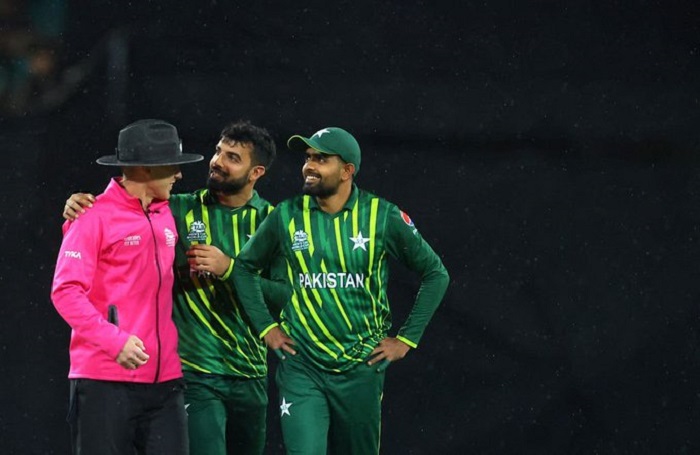 Sydney: Iftikhar Ahmed and Shadab Khan’s sensational fifties followed by Shaheen Shah Afridi’s three-wicket haul guided Pakistan to a 33-run victory over South Africa in a rain-curtailed do-or-die match in their Super 12 encounter of the ongoing ICC Men’s T20 World Cup at the SCG in Sydney on Thursday.

In the rain-curtailed 14-over match, skipper Temba Bavuma top-scored for South Africa with 36 off 19 while Aiden Markram played a knock of 20 runs in 14 deliveries. For Pakistan Shaheen bagged three while Shadab Khan scalped two wickets. With this comprehensive victory over the Proteas, Pakistan can keep hoping against hope for a miracle after doing what was needed of them against South Africa.

Chasing a competitive target of 186, South Africa got off to a bad start as they lost their opener Quinton de Kock and Rilee Rossouw under three overs and left tottering at 16/2.

Pakistan’s star pacer Shaheen Afridi struck in the very first over of the innings as he dismissed de Kock for zero. In the third over of the innings, Afridi produced a stunning short and wide outside-off delivery to send Rossouw packing for 7 runs.

Temba Bavuma and Aiden Markram then handled the charge as they hammered Haris Rauf for 20 runs in the fourth over of the game.

Shadab Khan was then brought into the attack and the bowler proved he is one of the best bowlers of Pakistan’s attack as he removed well-set batter Bavuma for 36 off 19 and Markram for 20 off 14, leaving South Africa tottering at 66/4.

Tristan Stubbs then came out to bat. After 9 overs rain stopped play, new batters Tristan Stubbs batting at 2* off 6 and Heinrich Klaasen playing unbeaten at 2 off 4, South Africa’s score read 69/4. At that point Pakistan were 16 runs ahead on Duckworth-Lewis-Stern (DLS) method.

The play was resumed after much delay and South Africa’s innings was reduced to 14 overs, with a DLS target of 142. That meant the Proteas needed 73 from their remaining five overs.

In the first over of the resumed play, Tristan Stubbs slammed Shadab Khan for 14 runs with the help of a stunning four and a six.

Heinrich Klaasen also opened his hands to slam Afridi for back-to-back two fours, however, his stint on the crease was cut short as he was dismissed after scoring 15 off 9 deliveries.

The equation went down to Proteas needing 43 runs in 12 balls. Naseem Shah’s slower ball removed Stubbs for 18 off 18 in the 13th over of the game. In the last over South Africa’s batters could only manage to score 7 runs and handed a 33-run win to Pakistan.

Earlier, Pakistan posted a challenging total of 185/9 with the help of brilliant fifties from Shadab Khan and Iftikhar Ahmed after losing quick wickets against South Africa.

Shadab scored a blazing fifty off just 20 balls to help Pakistan recover from the early setback by Protea pacers. Iftikhar also scored 51 playing the role of anchor to help his team end with a decent score.

Opting to bat first, the Pakistani inning started on a bad note as they lost key batter Mohammad Rizwan to an inswinging delivery from Wayne Parnell in the first over.

Fakhar Zaman’s replacement Mohammad Haris was dealt a blow on the head by Parnell as he had his tail up after dismissing Rizwan in the over earlier. However, Haris came back strongly in the second over to smack Kagiso Rabada for back-to-back sixes, while also hitting him for a four in the same over.

The batter looked threatening as he smashed Parnell for another boundary in the next over. Meanwhile Pakistan’s captain Babar Azam struggled to find the middle of the bat and looked to bide his time at the wicket.

Haris continued his aggressive approach and scooped Anrich Nortje above the wicketkeeper’s head for a six in the fifth over. However, the pacer had the last laugh as he got rid of him on the very next ball, trapping him leg before wicket, in front of the stumps.

The right-hander played a blitzing cameo to push Pakistan’s net run rate before he was dismissed for 28 off 11 balls.

Pakistan’s captain’s inning was cut short by Lungi Ngidi, as he ended the scratchy inning of the batter in the sixth over reducing the team to 42/3 at the end of the powerplay.

The men in green were dealt another blow as Nortje sent Shan Masood packing in the seventh over, pushing Pakistan on the back foot.

An important fifth-wicket partnership between Mohammad Nawaz and Iftikhar Ahmed helped the Pakistan inning, as both batters looked comfortable at the crease and took the team beyond the 10-over mark at 68/4.

Iftikhar looked in great nick and looked the most comfortable of all batters as he smashed Kagiso Rabada for two boundaries in the 10th over.

Left-hander Nawaz looked to take the attack to the bowlers after having spent time at the wicket and attacked Ngidi in the 12th over, smashing him for two boundaries. The batter put his foot on the accelerator as he took Tabraiz Shamsi to the cleaners, smashing him for a massive six and a four in the 13th over.

However, Shamsi prevailed and came out on top as he dismissed Nawaz on the last over of the 13th over. Iftikhar continued his merry way and smashed Parnell for a six to bring up his team’s hundred in the 14th over.

All-rounder Shadab Khan, who had just walked out to bat, took a liking to Shamsi and scored a six and a boundary of the bowler in the 15th over.

The ace all-rounder then decimated the Proteas bowlers as he sent the ball flying around the ground frequently, providing a much-required boost to the Pakistani inning.

He went on to score a fifty off just 20 balls in the 19th over, with Iftikhar also bringing up his half-century in the same over. The batting duo bludgeoned the South African bowlers as they stitched an 82-run partnership off just 35 balls, helping resurrect the Pakistani inning.

Pakistani lower order scored 117 runs in the last 10 overs, helping the team post a challenging total for the South African team, as they ended with 185/9 in their 20 overs.