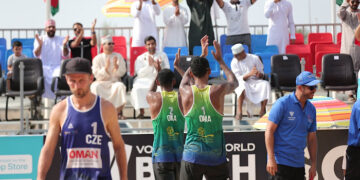 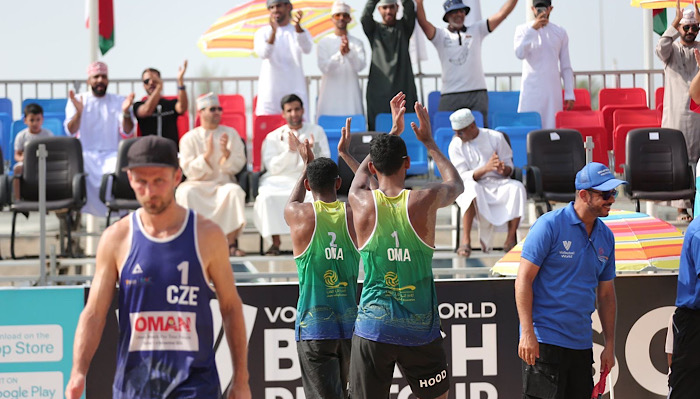 Muscat: The duo of the Sultanate of Oman’s national beach volleyball team, Mazen Al Hashimi and Hood Al Jalboubi, qualified for the semifinals of the World Beach Pro Futures Tour, which was held in the Wilayat of Sohar located in North Al Batinah Governorate.

The qualification of the duo of the national team came after the victory in the quarter-finals against the duo of the Gambian team by two games to nothing, with a score of 21/15 and 21/12, in a match in which the players were able to perform a great level in both halves of the match, in the presence of a crowd.

In the other matches of the quarter-finals, Haitham Al-Sharqi and Ahmed Al-Hosani, bid farewell to the championship after losing to the duo of the Chinese team (A), which qualified for the round of four, and today’s competitions witnessed the qualification of the Czech duo to the semi-finals after their victory over the Chinese duo (B). With a score of two games to nothing, the Latvian duo qualified after defeating the Austrian duo with the same score.

Tomorrow, on the last day of the round, the national team will meet the Czech team in the first confrontation of the semi-final, while the second confrontation will bring together the teams of China and Latvia, so that the two qualified teams will play the final match on the same day under the auspices of His Excellency Abdulsalam bin Muhammad Al-Murshidi, Chairman of the Oman Investment Authority.

His Excellency Ali bin Ghanem Al Rabiah Al Kuwari, President of the Qatar and West Asian Volleyball Federations, said that the tournament is witnessing great competition with the presence of a group of international teams at the level of the “Future” classification from different continents of the world and the presence of Arab teams such as Oman and Qatar, and the qualification of the Omani team to the semi-finals after presenting a great level in the matches, this team is a success and a start to collecting points for the team at the international level.

Al-Kuwari added in a statement to the Oman News Agency that Oman succeeded in hosting this tournament in all respects and witnessed a large public presence, expressing his hope that Oman would host a number of tournaments, including the World Challenge Championship.