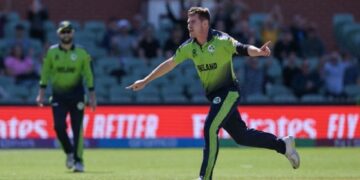 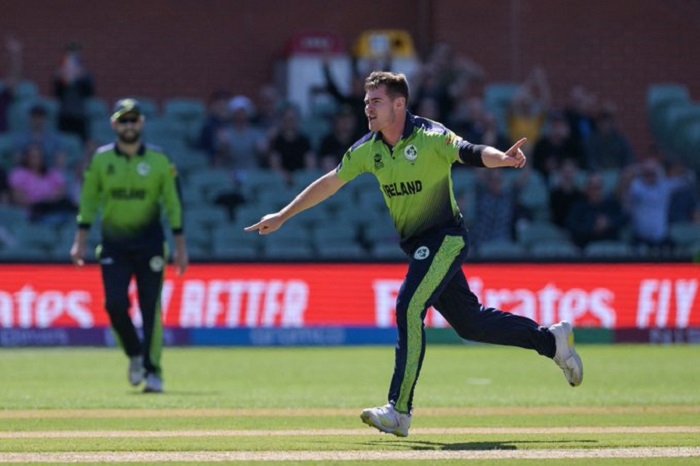 Adelaide : All round New Zealand powered by performances from skipper Kane Williamson and bowlers finished their group stage campaign on top of Group 1 table after a 35-run win over Ireland in Adelaide on Friday.

New Zealand have finished their group-stage campaign with three wins in five matches and a total of seven points. Ireland have finished their campaign in the fifth position in the points table with three points and one win in five matches. With a high run rate, they are big favorites to cruise into the semis even if Australia and England win their final matches. Chasing 186, Ireland was off to a good start. Openers Paul Stirling and Andy Balbirnie hit a boundary or six in almost every over at least once and their running between wickets was fine.

The duo brought up their 50-run stand in 40 balls. Spinner Mitchell Santner gave Kiwis their first breakthrough by dislodging Balbirnie’s stumps for 30 off 25 balls. Ireland was 68/1 in 8.1 overs.

Another spinner Ish Sodhi dismissed Stirling for 37 off 27 balls. Ireland was 2 down at 70 in 9.1 overs.

At the end of 10 overs, Ireland was at 73/2, with Harry Tector and Lorcan Tucker not out at 2 runs each.

Irish could not really keep up with the asking rate and the loss of their star openers proved to be too much for them to bear. Harry Tector (2), Gareth Delany (10), Tucker (13), Curtis Campher (7) lost their wickets as Santner and Sodhi continued to weave their spin web all over Irish batting. Pacers Lockie Ferguson also stepped in to dismiss Delany.

Tim Southee then made inroads into Irish batting, dismissing Campher for just seven. Ireland was left 6 down for 120 runs. In their final three overs, Ireland needed 60 runs.

Earlier, Captain Kane Williamson found his form at the Adelaide Oval to guide New Zealand to 185/6 against Ireland in the Super-12 encounter at the ongoing T20 World Cup.

Despite Joshua Little’s maiden hat trick, the black caps managed to post a challenging total with the help of Williamson and Daryl Mitchell’s superb knocks.

Put in to bat by Ireland, the Blackcaps started cautiously with both openers Devon Conway and Finn Allen scoring just 16 runs off the first three overs. However, Allen broke the shackles in the fourth over as he smashed three boundaries to Gareth Delany to inject momentum into the Kiwi innings.

The batter stuck to his aggressive approach and hit Mark Adair for two boundaries and a six before Adair had the last laugh. The bowler dismissed Allen on the last ball of the over to draw first blood for Ireland.

New Zealand captain Kane Williamson walked onto the crease to join Conway who looked sluggish on a belter of a pitch.

The batting duo refrained from playing rash shorts and looked to place the ball in the gaps to keep the scoreboard ticking and took the team to 75/1 at the halfway mark.

Kiwi innings saw a change in approach from Williamson and Conway as they hit Fionn Hand for a six and two boundaries in the 11th over.

The next over however saw Conway playing a slog sweep which did not clear the ropes and was grabbed by Adair to end the batter’s scratchy inning.

Explosive batter Glenn Phillips blasted a six on his second ball to start his inning. The batter hit two more boundaries in his brief stay before being dismissed in the 14th over.

Right-hander Daryl Mitchell joined Williamson at the crease as the skipper turned on his beast mode to rip apart the Irish bowlers.

The captain struck three boundaries and two sixes during overs 14 and 18 to provide much-needed impetus to the Kiwi inning. He played a superb knock of 61(35) before becoming the first wicket for Joshua Little.

Pacer Joshua then picked up two consecutive wickets to clinch Ireland’s second hat-trick of the T20 World Cup. He dismissed James Neesham and Mitchell Santner on the third and fourth delivery of the 19th over to complete his hat-trick.

Irish bowlers pulled things back at the fag end of the inning as they conceded just 12 runs off the final two overs to restrict New Zealand to 185-6.