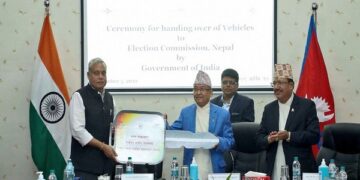 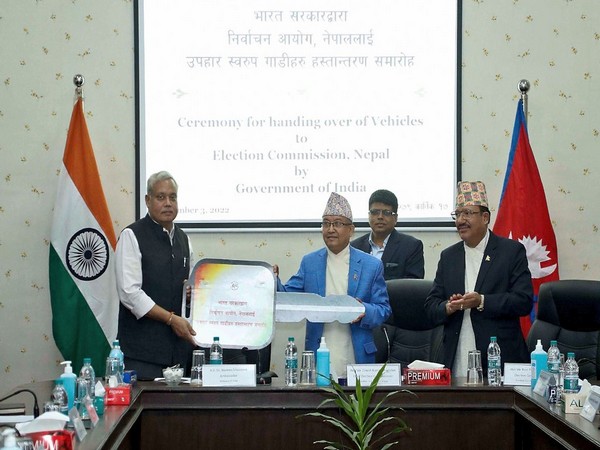 Kathmandu: Extending logistical support to Nepal for the conduct of the upcoming election, the Indian government on Thursday handed over 80 vehicles to Kathmandu’s Election Commission.

In a ceremony, Indian Ambassador to Nepal, Naveen Srivastava handed over 80 vehicles to Chief Election Commissioner of Nepal, Dinesh Kumar Thapaliya, as a part of the 200 vehicles that have been provided earlier by India.

“We are in the process of conducting an election for House of Representatives and Provincial Assemblies on November 20, 2022. From today we only have 17 days for Election Day. The periodic election is a must to sustain the democratic system. The Government of India has been helping us in our major elections by providing the vehicles, election materials and other essential supports,” Thapaliya, Chief of Nepal’s electoral body said addressing the event.

Apart from providing logistical support for the upcoming election, the Chief Election Commissioner of India also has announced that they will arrive in Nepal to observe the conduction of polls on November 20th.

” I am happy to mention that Chief Election Commissioner of India Rajiv Kumar, Chairperson of the Association of World Election Bodies is arriving to observe Election Day with the team,” Chief election commissioner Thapaliya added.

India and Nepal enjoy multi-faceted and multi-sectoral partnerships rooted in strong civilizational links and deep people-to-people contacts. The handing over of today’s vehicles is reflective of the close and friendly relationship between India and Nepal.

The Indian Ambassador to Nepal- Naveen Srivastava, handed over vehicles to Minister for Finance- Janardan Sharma as a gift of India for logistical support to various Nepali institutions for the conduct of elections.

Out of 200 vehicles 120 will be utilized by security forces and 80 vehicles by the Election Commission of Nepal. These vehicles would prove to be useful in further augmenting the logistical arrangements of various institutions of Nepal across the country for conducting the polls.
The government of India has been extending support in the form of vehicles as per the request of the Government of Nepal in previous years as well, for the utilization by the Election Commission as well as the security forces of Nepal.

“The Government of India for years have been supporting Nepal with vehicles. Till now we have given about 2400 vehicles to the Government of Nepal out of which 2000 are utilized by security forces and 400 by the election commission. We wish you a successful commencement of the election efficiently. The harmonious relationship that exists between India and Nepal, today’s vehicle handover ceremony also reflects the bond,” Indian Ambassador Naveen Srivastava said.

India and Nepal enjoy a multi-faceted and multi-sectoral development partnership that is reflective of the closeness of the people of both countries. The extension of these logistical provisions reflects the continued support of the Government of India for contributing to the development of people-to-people links.

Earlier on Tuesday, India had handed over a total of 200 vehicles to Nepal’s Finance Minister and Thursday’s handover comes as a part of it. Out of those vehicles 120 will be utilized by security agencies while 80 would be used by the Election commission.

Nepal on 20th November will elect 165 representatives as per the First Past the Post (FPTP) in the 275 membered House of Representatives or the Lower House of the bi-cameral parliament. The remaining 110 seats will be decided on a Proportional Representation basis. The state assemblies on the other hand would account for 330 seats.