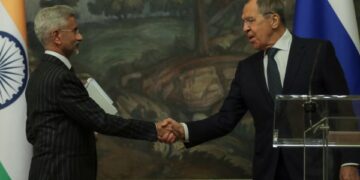 He had spoken with Indian Foreign Minister Subrahmanyam Jaishankar about the prospects of military and technological cooperation, Lavrov said on Tuesday after a meeting with Jaishankar in Moscow, according to the state news agency Tass. What specific defence equipment might be discussed remained open. It was the fifth meeting of the two ministers this year.

Referring to aid to Ukraine, Lavrov accused Western countries of trying to consolidate a “dominant role in world affairs” and prevent “the democratisation of international relations” under the pretext of “Ukrainian events.” He therefore highly valued the position of Russia’s “Indian friends” on Ukraine, Lavrov said.

India is neutral on Russia’s war on Ukraine because it has close relations with both the West and Russia.

The country also does not support Western sanctions and promotes conflict resolution through dialogue. Most recently, India has been buying more relatively cheap oil from Russia.

New Delhi also relies heavily on Moscow for its military equipment and spare parts. According to Lavrov, Russia and India also want to cooperate more closely in the fields of nuclear energy and space travel.

Jaishankar stressed that his country wants to continue buying oil from Russia. “As the third largest consumer of oil and gas and a country with not very high incomes, we have to look for affordable sources, so the India-Russia relationship is to our advantage.” — dpa