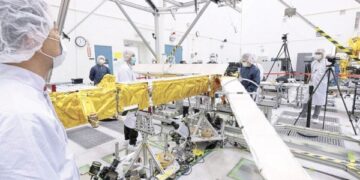 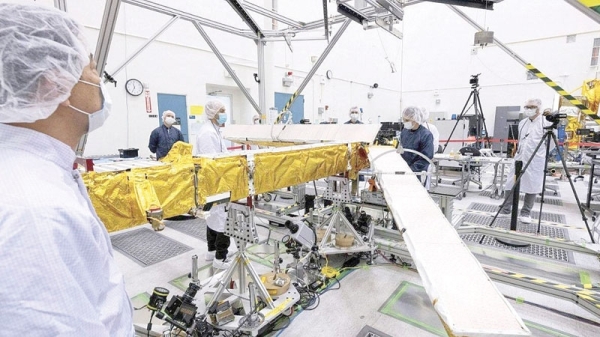 A NASA-led international satellite mission was set for blastoff from Southern California early on Thursday on a major Earth science project to conduct a comprehensive survey of the world’s oceans, lakes and rivers for the first time.

Dubbed SWOT, short for Surface Water and Ocean Topography, the advanced radar satellite is designed to give scientists an unprecedented view of the life-giving fluid covering 70 per cent of the planet, shedding new light on the mechanics and consequences of climate change.

A Falcon 9 rocket, owned and operated by billionaire Elon Musk’s commercial launch company SpaceX, was set to liftoff before dawn on Thursday from the Vandenberg US Space Force Base, about 170 miles (275 km) northwest of Los Angeles, to carry SWOT into orbit.

If all goes as planned, the SUV-sized satellite will produce research data within several months.

Nearly 20 years in development, SWOT incorporates advanced microwave radar technology that scientists say will collect height-surface measurements of oceans, lakes, reservoirs and rivers in high-definition detail over 90 per cent of the globe.

The data, compiled from radar sweeps of the planet at least twice every 21 days, will enhance ocean-circulation models, bolster weather and climate forecasts and aid in managing scarce freshwater supplies in drought-stricken regions, according to researchers.

The satellite was designed and built at NASA’s Jet Propulsion Laboratory (JPL) near Los Angeles. Developed by the US space agency in collaboration with its counterparts in France and Canada, SWOT was one of 15 missions listed by the National Research Council as projects NASA should undertake in the coming decade.

One major thrust of the mission is to explore how oceans absorb atmospheric heat and carbon dioxide in a natural process that moderates global temperatures and climate change.

Scanning the seas from orbit, SWOT is designed to precisely measure fine differences in surface elevations around smaller currents and eddies, where much the oceans’ drawdown of heat and carbon is believed to occur. And SWOT can do so with 10 times greater resolution than existing technologies, according to JPL.

Oceans are estimated to have absorbed more than 90 per cent of the excess heat trapped in Earth’s atmosphere by human-caused greenhouse gas emissions.

Studying the mechanism by which that happens will help climate scientists answer a key question: “What is the turning point at which oceans start releasing, rather than absorbing, huge amounts of heat back into the atmosphere and accelerate global warming, rather than limiting it,” said Nadya Vinogradova Shiffer, SWOT’s programme scientist at NASA in Washington.

SWOT’s ability to discern smaller surface features also be used to study the impact of rising ocean levels on coastlines.

More precise data along tidal zones would help predict how far storm-surge flooding may penetrate inland, as well as the extent of saltwater intrusion into estuaries, wetlands and underground aquifers.

Freshwater bodies are another key focus SWOT, equipped to observe the entire length of nearly all rivers wider than 330 feet (100 metres), as well as more than 1 million lakes and reservoirs larger than 15 acres (62,500 square metres).