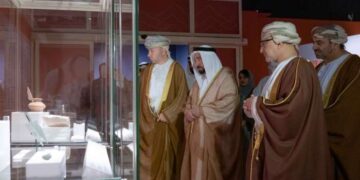 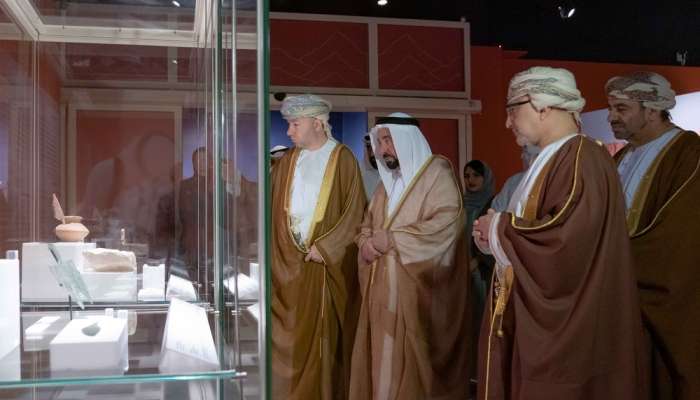 Sharjah: The “Omani Civilisation: Origin and Development” exhibition, organised by the National Museum in cooperation with Sharjah Museums Authority, was inaugurated on Wednesday at Sharjah Archeology Museum. The exhibition runs till 7 June 2023.

The exhibition’s opening ceremony was held under the patronage of Sheikh Dr. Sultan Mohammed Al Qasimi, United Arab Emirate’s (UAE) Supreme Council Member and Ruler of the Emirate of Sharjah.

The event was also attended by Salim Mohammed Al Mahrouqi, Minister of Heritage and Tourism, Jamal Hassan Al Moosawi, Secretary General of the National Museum, Sayyid Dr. Ahmed Hilal Al Busaidi, Ambassador of the Sultanate of Oman to the UAE and Manal Ataya, Director General of the Sharjah Museums Authority.

The exhibition showcases a rare collection of 100 artefacts that highlight the deep-rooted ties between Oman and the UAE and the rich history of the region.

They also trace the social, and geographical developments witnessed by the Omani civilization throughout the Stone Age, the Bronze Age and the Iron Age until the early Islamic era.

Featured objects in the exhibition comprise fishing gears, weapons, clay and stone pots, ornaments, stamps, farming equipment, and jewellery such as a rare golden necklace that dates back to the period between 300 BC and 400 AD.

Also displayed in the exhibition are a cuneiform tablet that dates back to 2100 to 2000 BC which lists materials needed to build a fleet of boats that could sail from ‘Ur’, a Sumerian city-state in Mesopotamia (Iraq) to Magan (Oman), a collection of daggers made of copper and silver, as well as a number of figurines, ceramics, and stamps including one with proto-literate signs that date back to 2200 BC.

Commenting on the event, Jamal Hassan Al Moosawi, Secretary General of the National Museum said: “The National Museum, through its participation in the “Omani Civilisation: Origin and Development” exhibition took precedence as the first integrated museum exhibition from the Sultanate of Oman to be held in the United Arab Emirates, which reflects the qualitative level of cultural and museum cooperation between the National Museum and the Sharjah Museums Authority.”

He added: “The exhibition comes within the framework of the cultural diplomacy pursued by the National Museum with the aim of promoting knowledge, and in affirmation of the strong ties that link the Sultanate of Oman and the United Arab Emirates, through the exchange of artefacts and exhibitions, and providing access to the National Museum’s collections to a wider segment of visitors from around the world, citizens and residents of the United Arab Emirates.”