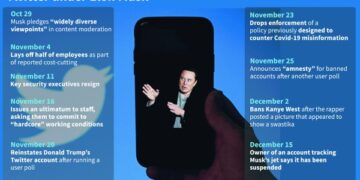 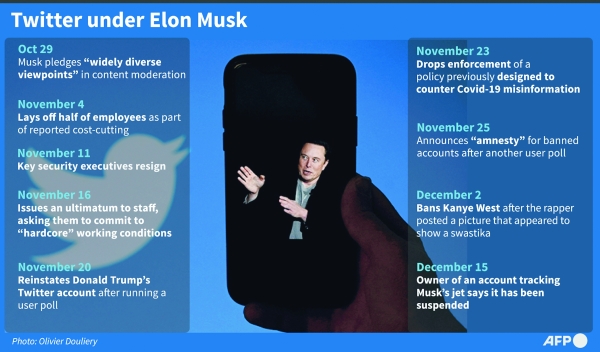 SAN FRANCISCO: Twitter suspended on Thursday accounts of more than a half-dozen journalists who had been writing about the company and its new owner Elon Musk.

Silencing journalists at Twitter while claiming to be a free speech champion is the latest controversy provoked by Musk since he took over the company, which has seen staffing gutted and advertisers exit.

Some of the journalists had been tweeting about Twitter shutting down an @ElonJet account that tracked flights of billionaire Musk’s private jet and about versions of that account hosted at other social networks.

Twitter did not say why the reporters’ accounts were suspended.

“Nothing says free speech like suspending journalists who cover you,” Sarah Reese Jones of news commentary website PoliticusUSA said in a tweeted response to posts about the suspensions.

“The impulsive and unjustified suspension of a number of reporters, including CNN’s Donie O’Sullivan, is concerning but not surprising,” the news organisation said in a tweet.

“Twitter’s increasing instability and volatility should be of incredible concern for everyone who uses the platform.”

CNN said it has asked Twitter for an explanation of the suspension.

The New York Times said in a statement it also wanted answers from Twitter regarding the “questionable” suspension of journalists.

In a tweet late on Thursday, Musk appeared to allude to the suspension of the reporters’ accounts with this tweet: “If anyone posted real-time locations & addresses of NYT reporters, FBI would be investigating, there’d be hearings on Capitol Hill & Biden would give speeches about end of democracy!”

Musk on Wednesday tweeted that a car in Los Angeles carrying one of his children was followed by “a crazy stalker” and seemed to blame the tracking of his jet for this alleged incident. In the tweet, he said legal action is being taken against the person who ran ElonJet.

The Twitter account that tracked flights of Musk’s private jet was shut down on Wednesday despite the billionaire’s statement that he is a free speech absolutist.

Twitter later sent out word that it updated its policy to prohibit tweets, in most cases, from giving away someone’s location in real time.

Musk had gone public saying he would not touch @ElonJet after buying Twitter in a $44 billion deal as part of his commitment to free speech at the platform.

The European Union warned Musk on Friday that Twitter could be subject to sanctions under a future media law after the “worrying” suspension of several journalists from the platform.

“Elon Musk should be aware of that. There are red lines. And sanctions, soon.”

Twitter has lurched from one controversy to the next since Musk took control in late October.

The billionaire’s talk of unfettered speech scared off major advertisers and caught the attention of regulators.

Musk has reinstated the account of former US president Donald Trump and lashed out against the outgoing key advisor for the US response to the Covid-19 pandemic, Anthony Fauci, a frequent target of vitriol on right-wing media.

CNN has reported that Twitter’s former head of trust and safety fled his home after baseless attacks on Twitter content moderation, endorsed by Musk.

Meanwhile, a purge initiated by Musk at Twitter left more than half of its 7,500 employees on the sidelines and now many of them are taking the SpaceX and Tesla tycoon to court.

Musk at one point signalled he was going to war with Apple over the App Store, only to later tweet that it was a “misunderstanding.”

Market tracker Insider Intelligence forecast that Twitter will experience an exodus of users.

“Instead, users will start to leave the platform next year as they grow frustrated with technical issues and the proliferation of hateful or other unsavory content.” – AFP