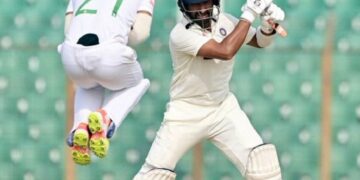 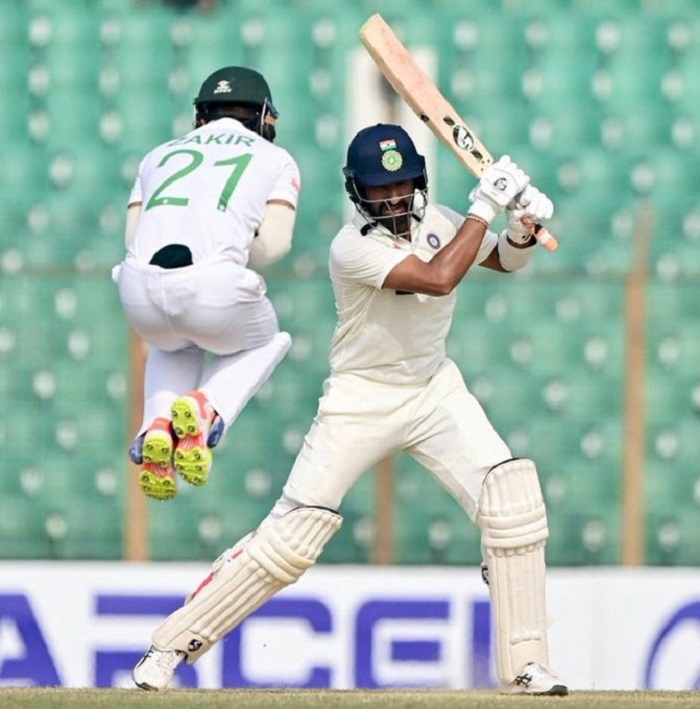 Chattogram : Shubhman Gill’s maiden Test ton followed by Cheteshwar Pujara’s 19th Test century helped India set a 513-run target for Bangladesh in the third day of the first test at Zahur Ahmed Chowdhury Stadium here. The hosts were 42 for no loss at stumps.

Resuming post-tea session at 140/1 Shubman Gill didn’t waste time and went on to score his maiden Test ton and India also crossed the 150-run mark. The duo of Gill and Cheteshwar Pujara also notched up a 100-run stand for the second wicket. Pujara went on to score his half-century in 87 balls with the help of four boundaries.

Pujara and Virat Kohli batted aggressively and scored a fifty-run partnership of just 48 balls for the third wicket.

Pujara shifted gears and went on to score his 19th Test ton in just 130 balls. This was Saurashtra lad’s first after January 2019.

India went on to declare the second innings at 258/2 setting a massive 513-run target for hosts.

In reply, Bangladesh too gave a good fight as openers Najmul Hossain Shanto and Zakir Hasan went on to score 42 runs.

India bowled out Bangladesh for 150 taking two remaining wickets in a short span after resumption of play on the third day. Kuldeep Yadav was the pick of Indian bowlers and picked up five wickets conceding only 40 runs.

India started off positively and did not lose any wicket till lunch. India openers were watchful in their brief stay at the crease going into lunch as Rahul looked the more fluent of the two openers. Gill was declared out but resorted to DRS to save his wicket. The duo watched out the bowlers as they took India to 36 runs at lunch without a loss.

India resumed the innings after lunch with captain KL Rahul (20) and Gill continuing to motor along.

Gill took the attack to the Bangladeshi bowlers as he upped the scoring rate and showed great intent from the moment he stepped in to bat in the second session. However, India lost Rahul to pacer Khaled Ahmed when he had scored 23 runs and India’s total was 70.

Khaled adopted the ploy of short balls coming around the wicket and tucking the batter, bowling superbly at his ribs. Rahul tried to counterattack but was caught at fine leg.

Pujara joined Gill to extend the host’s woes as the pair kept playing their shots to a toothless attack that could not use Shakin Al Hasan as a bowler and Ebadot Hossain having left the field.

Both the batters brought some much-needed momentum to the inning as India looked to set a huge target for the hosts. Bangladesh ran out of fuel in the second session as both Pujara and Gill countered the bowlers despite the pitch offering uneven bounce and spin.

India ended the second session at 140/1 and were ahead of the Bangladesh team by 394 runs.

Earlier, Kuldeep Yadav took his third fifer to bowl out Bangladesh for 150 before India came on to bat in the second inning on the third day of the first test.

Stand-in captain KL Rahul chose not to enforce the follow-on as the men in blue walked out to bat for their second inning after bowling Bangladesh out.