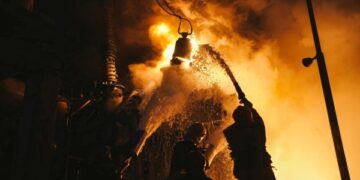 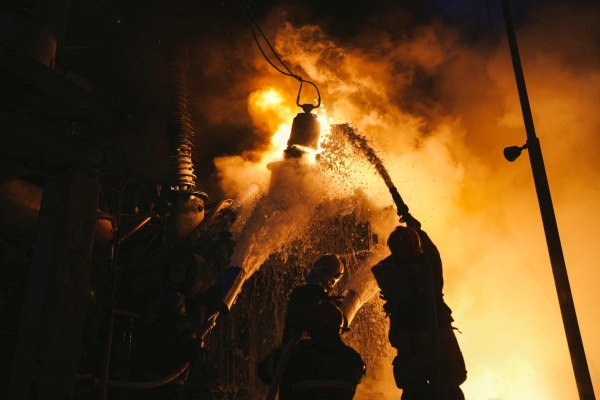 KYIV: Russian President Vladimir Putin on Monday arrived for a rare visit to neighbouring Belarus, which Moscow used to launch its attack on Ukraine nearly 10 months ago, for talks with close ally and strongman leader Alexander Lukashenko.

His arrival on an icy runway in Minsk came hours after Russian forces launched a swarm of attack drones at critical infrastructure in Kyiv, which provoked emergency blackouts in a dozen regions.

The Kremlin has for years sought to deepen integration with Belarus, which relies on Moscow for cheap oil and loans, but Lukashenko had resisted outright unification with Russia despite being a key ally in the war.

Speculation was mounting ahead of the Russian leader’s visit that he would pressure Lukashenko to send his troops to Ukraine alongside Russia’s military after a series of defeats for Moscow in nearly 10 months of fighting.

The drone attacks, which left three injured near Kyiv, came as Russia said it had shot down several US-made missiles over its airspace near Ukraine.

“I first heard the air raid siren howling from the street… I thought there is going to be a drone attack. For the first time, it scared me,” Natalia Dobrovolska, a 68-year-old resident of Kyiv, said.

She described hearing multiple explosions before power shut off in her building in western Kyiv. Officials said Russia had dispatched 35 attack drones nationwide, including 23 over Kyiv.

Ukraine said it had downed 30 of the aerial weapons, including Iranian-made “Shaheds”, which have pummelled the capital in recent weeks.

Energy operator Ukrenergo meanwhile announced that emergency electricity outages were scheduled in the capital and nearly a dozen regions.

At the same time, Moscow said its air defence systems had shot down four US-made missiles over Belgorod, a Russian region bordering Ukraine, in one of its first such claims in nearly 10 months of fighting.

“Four American ‘HARM’ anti-radar missiles were shot down in the airspace over the Belgorod region,” the defence ministry said on social media.

Ukraine has experienced frequent and deadly aerial attacks in the 10 months since Russia attacked in late February.

After a series of battlefield setbacks and lost territory this summer and autumn, Moscow stepped up its aerial campaign to target the country’s energy grid.

With winter setting in, missile and drone attacks have plunged cities around the country into darkness, and severed water and heat supplies to millions of Ukrainians.

After a major Russian assault aiming more than 70 missiles on cities last Friday, the national electricity operator was forced to impose emergency rolling blackouts as it raced to repair the battered energy grid.

Speaking to the leaders of several NATO countries via videolink after the drone attacks on Monday, President Volodymyr Zelensky urged Ukraine’s allies to supply its military with more weapons. — AFP

“Russian aggression can and must fail. And our task now is to accelerate it,” he told the leader assembled in Riga.

He said in a late night address on Sunday that some nine million people had their electricity restored after Russia’s latest missile barrage last week.

Ukraine has an estimated population of 40 million.

Ahead of Putin’s visit, Ukraine’s leader also described the situation on Ukraine’s border with Russia and Belarus as a “constant priority”.

“We are preparing for all possible defence scenarios,” Zelensky said, adding that he had recently discussed border regions with military commanders.

Lukashenko, who has been in power since 1994, is a long-time Kremlin ally and allowed Russian troops to attack Ukraine from his country on February 24.

Hours before Putin touched down in Minsk, Russia announced its forces were running military drills with Belarusian forces.

“From the morning until the evening twilight — there is not a single second of silence at the training grounds of Belarus,” the ministry said.

It did not say where the drills were taking place or how long they will last.

In October, Belarus announced the formation of a joint regional force with Moscow with several thousand Russian servicemen arriving in the ex-Soviet country, fuelling concerns Minsk could also send troops to Ukraine.

In fighting that has spilled over into Russian regions bordering Ukraine, one person was killed, and others were wounded on Sunday in Belgorod following attacks that the local authorities blamed on Kyiv.

Governor Vyacheslav Gladkov said on Monday that Ukrainian strikes left around 14,000 people without power in a district of the Belgorod region. — AFP