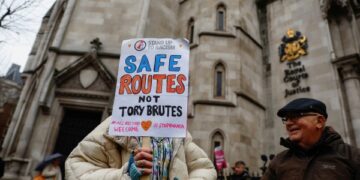 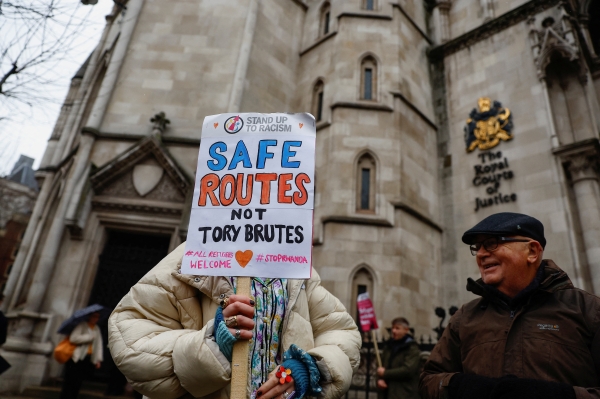 LONDON: Judges in London on Monday ruled that the UK government’s controversial plan to deport migrants to Rwanda was lawful, after a legal challenge by migrants and campaigners.

Former prime minister Boris Johnson brought in the proposal to try to tackle record numbers of migrants crossing the Channel from northern France by small boats.

But it triggered a wave of protests from rights groups and charities, and last-gasp legal challenges successfully blocked the first deportation flights in June.

Several individuals who arrived in small boats and organisations supporting migrants brought a case at the High Court in London for a judicial review of the policy, claiming it is unlawful.

Lawyers for the parties argued that the policy was unlawful on multiple grounds, including the assessment of Rwanda as a safe third country.

The judges acknowledged that the issue had stirred public debate but said its only remit was “to ensure that the law is properly understood and observed, and that the rights guaranteed by parliament are respected”.

“The court has concluded that it is lawful for the government to make arrangements for relocating asylum-seekers to Rwanda and for their asylum claims to be determined in Rwanda rather than in the United Kingdom,” they said in a summary.

“The relocation of asylum-seekers to Rwanda is consistent with the (UN) Refugee Convention and with the statutory and other legal obligations on the government including the obligations imposed by the Human Rights Act 1998.”

The judges however said interior minister Suella Braverman had not properly considered the circumstances of the eight claimants in the case and referred their cases back to her. Tackling asylum claims has become a political headache for the ruling Conservative government in London, despite its promise to “take back control” of the country’s borders after Britain’s Brexit departure from the European Union.

More than 43,000 migrants have crossed the Channel this year in small boats, heaping pressure on social services to accommodate them while their asylum claims are processed.

Johnson’s short-lived successor Liz Truss and the incumbent Rishi Sunak have backed the Rwanda deal, which aims to send anyone deemed to have entered the UK illegally since January 1 to the African nation.

Sunak and Braverman have both said urgent action is needed to prevent further tragedies in the Channel. Four people died last week when their boat capsized in freezing waters.

Both welcomed the ruling. “We have always maintained that this policy is lawful and today the court has upheld this,” Braverman said, insisting it will help those relocated to “build new lives”.

Sunak’s official spokesman told reporters the government would “look to push ahead with this as soon as possible”, although an appeal is likely. — AFP

The Rwandan government called the ruling a “positive step” towards solving the global migration crisis.

Monday’s ruling involved asylum-seekers from Syria, Iran and Iraq, migrant support groups Care4Calais and Detention Action, plus the PCS union whose members would have to implement the removals.

James Wilson from Detention Action said the body was “very disappointed by the outcome today” but would “regroup and consider next steps”.

Paul O’Connor of the PCS said the policy remained “morally reprehensible” despite the ruling and an appeal may be “seriously” considered to block deportations.

Brexit hardliner Braverman suggested in an interview published on Saturday that the European Convention on Human Rights and the UN refugee convention were ill-suited to dealing with modern migration.

Such agreements had been struck in the aftermath of World War II and were “designed for a world where travel was not cheap, numbers were much lower, flows of people were much smaller”, she told The Times. — AFP