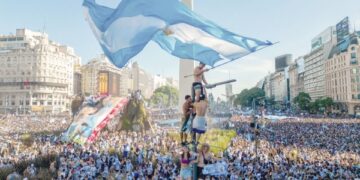 Messi and Argentina the toast of world media

Messi and Argentina the toast of world media 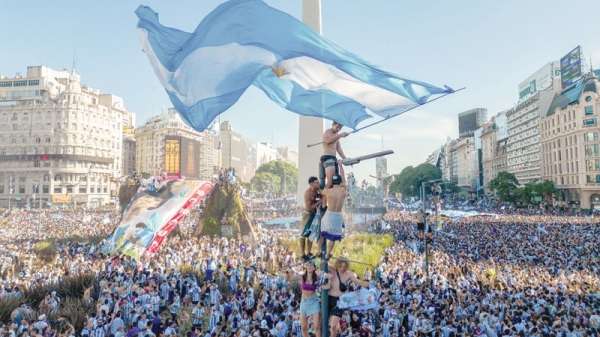 DOHA: Legendary, greatest, immortal: News media across the planet ran out of superlatives after Lionel Messi led Argentina to victory in one of the most dramatic World Cup finals ever.

And it sparked an explosion of joy in Argentina, where the media saluted the nation’s latest generation of World Cup heroes, and their talisman Messi.

Images of him holding the trophy aloft and the team’s celebrations adorned news websites and social media feeds in Argentina.

Messi’s Argentina had won “the greatest final in history”, said the daily La Nacion, while Clarin described it as an “unforgettable” match.

The sports daily Ole’s homepage was splashed with “We are world champions!”

The final was billed as a titanic showdown between Messi and French superstar Kylian Mbappe, and it did not disappoint the neutrals.

While Messi scored from the spot twice to put Argentina in the lead, Mbappe inspired the French fightback with a hat-trick to take the final to penalties.

“Head held high,” read the headline on the front page of French sports daily L’Equipe, the text imposed on an image of Mbappe holding his Golden Boot prize as he walked past the World Cup trophy.

“Legendary,” said the front page of the daily Liberation, with photos of both Messi and Mbappe, while Le Figaro described the French star’s efforts as “heroic”.

IN THE HAND OF GOD

Messi had cemented his place long ago among the greatest of all time, but the football world was abuzz ahead of the final with the prospect of the fleet-footed magician crowning his glittering career with the World Cup — the one major trophy he had never won.

And with Argentina’s win on Sunday, the debate about his stature in the history of the sport was settled for most.

In Britain, The Times said on its front page that Messi had won the “battle of modern maestros in greatest final”. On the front page of its sports section, it described him as, simply, “The Greatest”.

The Mirror called him the GOAT — “greatest of all time” — while The Sun said the World Cup was “In the Hand of God”, a cheeky reference to Maradona’s infamous goal against England in the 1986 tournament.

The foot of God

In Germany, the Sueddeutsche Zeitung also played on that reference with the headline “The foot of God” for Messi.

It called the Argentina-France showdown “the most exciting final” in World Cup history, while the daily Tagesspiegel said it showcased “two exceptional talents”.

Even in Brazil — an intense rival — the O Globo newspaper paid tribute to Messi, saying football had “paid its debt” to its biggest star.

In the United States, which will host the next World Cup with Canada and Mexico, a report in The Washington Post said Messi was finally rewarded in an “immortal” final.

Spain’s El Pais newspaper said Messi had been “crowned in the final of finals”. And in Asia, where Messi has legions of fans, Indian newspaper The Hindu said his Argentina team had kept their “date with destiny”, while South Korean daily Hankook Ilbo called him a “god of football”. — AFP