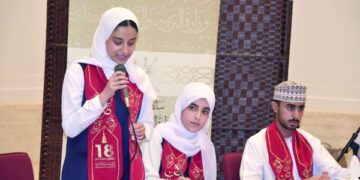 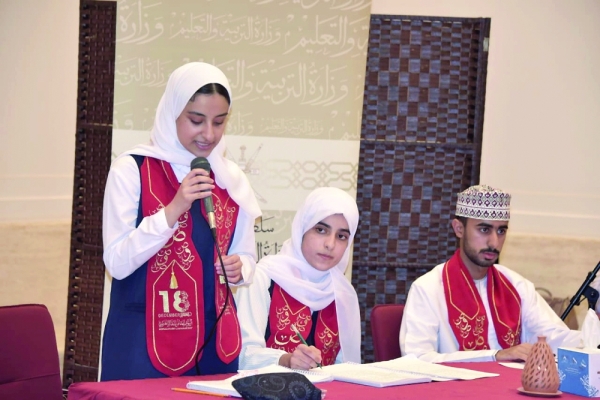 NIZWA: The Directorate General of Education in Al Dakhiliyah Governorate celebrated the International Day of the Arabic Language, which falls on December 18 of each year, under the slogan (The Contribution of the Arabic Language to Human Civilization and Culture), at the Sultan Qaboos Mosque in Nizwa.

The ceremony was organised by the Directorate’s Educational Supervision Department under the auspices of Dr Masouma bint Habib al Ajamiyah, and in the presence of Saif bin Hamad al Abdali, Assistant Director General for Education Affairs.

The ceremony began with the opening of the Arabic Calligraphy Alphabets exhibition, which included 20 artworks produced by students and teachers of arts subjects in the governorate’s schools. The exhibition is under the supervision of Said bin Abdullah al Farsi, supervisor of art subject, and teacher Asila bint Salim al Kindiyah, from Madinat Al Ilm School.

Majid bin Ahmed bin Majid al Qasabi, an Arabic language supervisor at the Directorate General of Education in Al Dakhiliyah Governorate, in his speech said that this year, we chose the axis that embodies a manifestation of its greatness and a feature of its immortality.

A short film talked about the importance of the Arabic language was also shown in the ceremony.

Dr Abdullah bin Muslim al Hashimi, Associate Professor in the College of Education, SQU presented a lecture entitled, ‘The role of the Arabic language in shaping the identity of the Arab person.’

Poet Hisham al Saqri, from the University of Nizwa, presented a poem that expressed the role of the Arabic language.

The celebration also included a presentation on the distinguished school initiatives in teaching and learning the Arabic language. Its idea is based on presenting the initiatives implemented in public and private schools of the Al Dakhiliyah Governorate, which support the teaching and learning the Arabic language. It clearly impacts raising academic achievement for grades (1-12). These initiatives aim to exchange experiences between public schools and private schools.

Enhancing the motivation of male and female teachers towards implementing this type of initiative by presenting their initiatives. And adopting initiatives that contribute to raising the level of achievement among students in the Arabic language, spreading the spirit of cooperation and teamwork in schools, and exchanging practical experiences in implementing specific initiatives that contribute to treating weaknesses in Arabic language skills and raising academic achievement.

The initiative targeted public and private schools for grades (1-12) in Al Dakhiliyah Governorate, where 76 initiatives were submitted for the competition. Five initiatives have won after the evaluation.