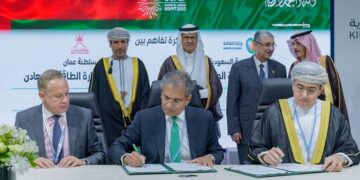 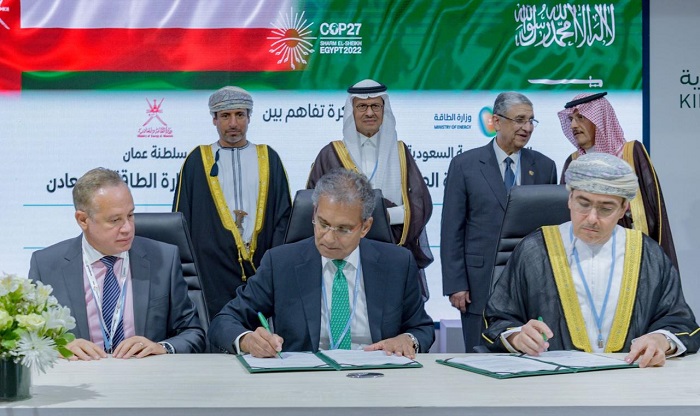 Sharm El Sheikh: Oman Investment Authority (OIA) signed a Memorandum of Understanding (MoU) with ACWA Power of the Kingdom of Saudi Arabia (KSA), to explore the feasibility of investment of up to 10 per cent in the development, construction, and operation of the 1.1GW Suez Wind Energy project.

This investment is in line with the Sultanate of Oman’s commitment and pioneering role in reducing CO2 emissions and mitigating the adverse effects of climate change and in cooperation and partnership with the Kingdom of Saudi Arabia and the Arab Republic of Egypt. This project is valued at $1.5 billion.

The MoU was signed on the sidelines of the 27th Conference of the Parties to the United Nations Framework Convention on Climate Change (COP27) in Sharm El Sheikh, Egypt.
The signing ceremony was attended by Eng. Salim Al Aufi, Minister of Energy and Minerals and Head of the Omani delegation to the conference, Sheikh Khalifa Al Harthy, Undersecretary of the Foreign Ministry for Diplomatic Affairs, Naif Al Abri, Chairman of the Civil Aviation Authority (CAA), Dr Abdullah Al Amri, Chairman of the Environment Authority, Abdullah Al Rahbi, Ambassador of the Sultanate of Oman to Egypt, Permanent Representative of the Sultanate of Oman to the Arab League, and Humaid Al Ma’ani, Head of the Global Affairs Department at the Foreign Ministry, in addition to chief executives of OIA Companies operating in the field of energy.

Mulham Basheer Al Jarf, Acting Deputy President for Investment at Oman Investment Authority, said that OIA signed the MoU in line with Oman’s efforts to enhance joint investments with Arab nations like the Kingdom of Saudi Arabia and the Arab Republic of Egypt in renewable energy projects, particularly wind power.

Those projects, Al Jarf added, aim to reach the national goal of net zero emissions in all development sectors by 2050, simultaneously with Oman’s ambitious plans for energy transformation and decarbonisation and major green hydrogen and renewable energy projects.

He pointed out that OIA prioritises the clean energy sector in its investment activities and its sustainability plan for the renewable energy sector. This is achievable through OIA’s companies operating in the energy field or through partnerships with regional and international investors such as Hassan Allam Holding and ACWA Power of the KSA.

Mohammad Abunayyan, Chairman of ACWA Power, said that Suez Wind Energy was already a remarkable project because of its ambition and scale. Bringing together investors from within the Arab world for this regional project proves that the will for implementation, which is the key mission of COP 27, is strong.

He added that the signing of this important MoU demonstrates the confidence of investors in ACWA Power’s expertise and capability to deliver giga-scale projects. He said, “As we continue to build upon our renewables portfolio in Egypt, we value our continued partnership with Oman Investment Authority and Hassan Allam Holding and believe their collaboration and contribution to this significant wind energy project will strongly enable the energy diversification goals of the nation.”

The Suez Wind Farm project, which is expected to start operations in 2026, is located close to Ras Ghareb City in the Gulf of Suez region near Jabal Al Zait in Egypt. Power will be generated using turbines of up to 220 meters in addition to several latest advanced technologies. The plant is expected to operate at the highest level of efficiency and will generate enough power for approximately 1,080,000 residential units and reduce about 2.4 million tonnes of carbon emissions annually.

It should be noted that OIA, represented by its subsidiary OQ Group, signed a joint development agreement for the Oman Hydrogen Project with Saudi Company ACWA Power last May to establish an ammonia production plant using green hydrogen and renewable energy sources in Oman.