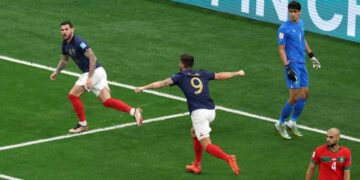 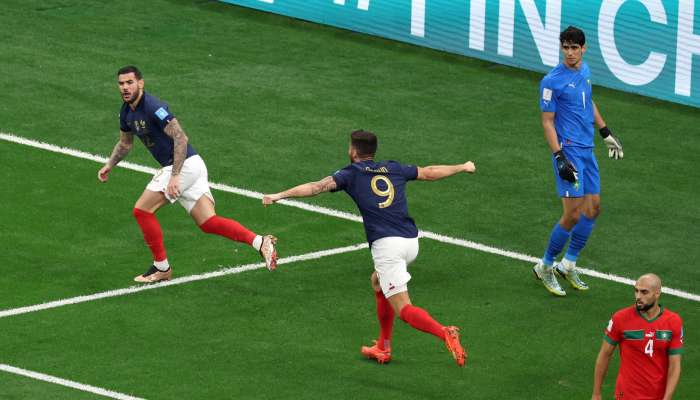 DOHA: It can’t have happened on too many occasions in 21 previous tournaments, but a team reached the World Cup final and weren’t the main story of Wednesday night.

Morocco’s dream run at the FIFA World Cup Qatar 2022 came to end as reigning champions France staved off a stiff challenge to win 2-0 and set up a mouth-watering summit clash with Messi’s Argentina.

France led from the fifth minute against Morocco, Theo Hernandez becoming the first opposition player to score past Yassine Bounou in six matches in Qatar when the left-back despatched an awkward ball on the half volley.

Didier Deschamps’ team deserve every plaudit they receive for winning a fourth World Cup semi-final inside the regulation 90 minutes. France will aim to become the first back-to-back winners since Brazil in 1962 when they face Argentina at Lusail Stadium on Sunday.

It is a brilliant final with all the makings of a classic. The teams last met at Russia 2018 when the French, inspired by a teenage Kylian Mbappe, won a belting contest 4-3.

Mbappe, attempting to win his second World Cup, against Paris Saint-Germain colleague Lionel Messi, pursuing his most cherished prize, is one of multiple narratives to whet the appetite over the next few days.

But Morocco exit this World Cup as history makers and following a performance packed with courage and spirit and perseverance. The first team from Africa and the Arab world to play in a World Cup semi-final, they dug into the deepest reserves of endurance and character in an attempt to go one better.

Morocco barely put a foot wrong defensively in this competition. But they paid a heavy price for a minor error when Jawad El Yamiq leapt out of his defensive line to allow Antoine Griezmann a run into the box. Achraf Hakimi made a tremendous block when Mbappe tried to steer home the delivery, but Morocco were unable to recover their shape. Mbappe shot again, this attempt deflected for Hernandez – who wouldn’t have been playing but for an injury to brother Lucas in the opening match – to steer home his second international goal.

Olivier Giroud capitalised on a rare piece of misjudgement from Romain Saiss to run through and rattle the post after 17 minutes. Saiss was evidently inhibited by the thigh injury he sustained earlier in the tournament and the defender was soon replaced, joining Nayef Aguerd, forced to withdraw from the starting XI prior to kick-off, on the sidelines.

It felt like the roof might fall in on Morocco. But that would have been to underestimate this resilient, gifted team. Hugo Lloris had already been tested by Azzedine Onuahi’s dipping strike – hit with the instep, a la Cristiano Ronaldo – when Ibrahima Konate, deputising for the ill Dayot Upamecano did very well to prevent.

El Yamik nearly atoned for his earlier mistake in spectacular fashion when, with his back to goal, he carefully tracked Groud’s clearing header and met the dropping ball with an overhead kick that need a combination of Lloris’s right glove and the upright to keep it out.

France weren’t without chance to add to their lead. El Yamiq hacked clear when Mbappe scooped ball towards goal after Aurelien Tchouameni’s low pass in behind. Tchouameni returned the ball into the box for Giroud but he was off target with his shot.

Morocco finished the half applying pressure to the France goal via a succession of dead-ball deliveries, without cracking strong French resistance.

Konate managed another tremendous interception when El-Nesyri’s eyes widened as a delivery from substitute Yahya Attiat-Allah arrived in the six-yard box. Hakimi couldn’t tame the ball in a promising position in the French box and another substitute in Abderrazak Hamdallah stirred memories of Diego Maradona with a defender-dodging dribble into the penalty area. Hamdallah, who would be denied a consolation deep into stoppage time by Jules Kounde’s goalline clearance, delayed his strike and was eventually crowded out.

There was no hesitation from Randal Kolo Muani, however, no sign of the 24-year-old needing time to warm-up seconds after his introduction, when Mbappe capped an excellent piece of build-up play with a pass rolled to the back post.

Kolo Muani was never going to miss, scoring the second fastest World Cup goal by a substitute. It was a nice piece of history for the Eintracht Frankfurt player. But no match for the story created by Morocco over the past three weeks.

The progress in Qatar of Walid Regragui’s Moroccan trailblazers was founded on sturdy defence, only one goal conceded en route to the last four and that scored by one of their own players when they led Canada 2-0.

Indeed, Nayef Aguerd’s lapse against the Canadians was the only goal let in by Morocco in nine matches prior to this encounter. For all the experience and talent in a team brilliantly coached and organised by Regragui, Morocco didn’t know what it was to fall behind until Hernandez’s fifth-minute goal.

The blueprint was evident from the opening game against 2018 runners-up Croatia, which finished goalless, and it had stoic defence at its core. A meeting with Belgium appeared to be heading for another stalemate before Morocco got their noses in front after 73 minutes.

Morocco were comfortable absorbing increasing pressure as the Belgians urgently pursued an equaliser, while the speed and technical proficiency that are hallmarks of this team’s midfield and attack proved perfect ingredients for the potent counter-attacking responsible for a decisive second goal.

Morocco worked like stink to apply the brakes to Spain’s passing carousel in the last 16, eventually prevailing on penalties after 120 goalless minutes. Trying to respond to Youssef En-Nesyri’s first-half strike in the quarter-final drove Portugal to distraction – and the World Cup exit door.

The last thing France wanted was to find themselves in the same boat as their fellow European sophisticates. Didier Deschamps has a gutsy team; they were rocked by an early Australia goal in their opening game but won 4-1 and the defending champions were on the ropes at 1-1 against England in the last eight before Olivier Giroud headed the winner.

The task of trying to carve open stingy Morocco would have been a formidable one, nonetheless – and grown in difficulty the longer we went at 0-0. Concede first against Regragui’s side and history tells us there’s no coming back.

France would have felt lousy, then, experienced a fleeting sense of foreboding, perhaps, when Mbappe was thwarted by a sliding penalty-area block from Hakimi that was the epitome of this African side’s cussedness. For the first time in three weeks, however, Morocco were slightly ragged. Mbappe’s follow-up shot ricocheted left for Hernandez and his connection on the dropping ball provided France with the start they desperately wanted but couldn’t possibly have expected.

The left-back’s strike gave France early superiority. More pertinently, for the first time in Regragui’s extraordinary reign, Morocco were trailing. They’ve overcome all manner of challenges to make history. Despite a herculean effort, this one was beyond even them.

• In the previous World Cup semi-finals when France won the trophy (1998 and 2018), their winning goals came from defenders: Lilian Thuram against Croatia in 1998 and Samuel Umtiti in the 1-0 victory over Belgium 20 years later.

• Theo Hernández’s opener, after four minutes, 39 seconds, is the earliest scored by any side in a World Cup semi-final since 1958, when Vavá scored inside two minutes for Brazil against France.