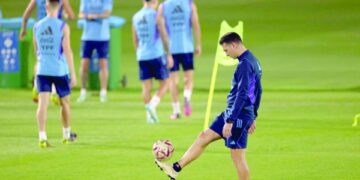 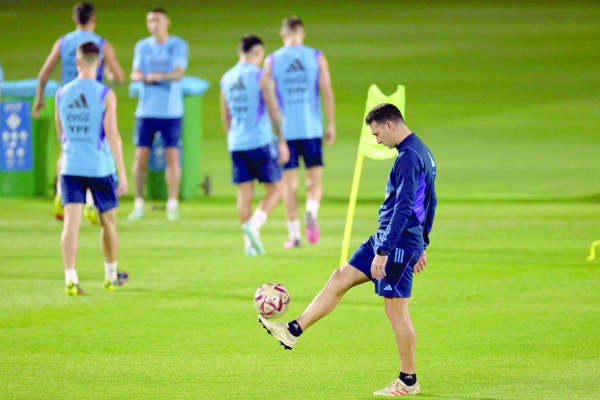 DOHA: Lionel Messi will deservedly hog the spotlight when Argentina face France in Sunday’s World Cup final, yet the potential pinnacle of his glorious career could have passed him by were it not for his manager Lionel Scaloni.

Scaloni has scripted one of the most fascinating stories in South American football in the last few years, having been plucked from coaching obscurity and taken an Argentina side that were in disarray to the brink of greatness.

When the Argentinian FA (AFA) made under-17 coach Scaloni the interim manager of their national side in August 2018, they were in dire straits and struggling to find a prominent name that wanted to take on the role after another World Cup debacle.

They were heartbroken after being knocked-out by France in the last 16 after a 4-3 defeat, with their talisman Messi having announced his international retirement.

A former player, Scaloni was 40 and had no previous experience as a head-coach.

After retiring from professional football in 2015, he joined Jorge Sampaoli’s coaching staff as an assistant at Sevilla in 2016. He followed him when Sampaoli made the move to Argentina and was on the staff at Russia 2018.

After the likes of Diego Simeone, Marcelo Gallardo and Mauricio Pochettino all rejected offers to take over after Sampaoli’s World Cup debacle, AFA decided to promote the energetic Scaloni as caretaker until they could find a permanent manager.

It was not a popular move and many Argentinian greats, including the late Diego Maradona, were critical of the decision.

“He can’t even direct traffic, how come he will direct the national team. Have we all gone mad?,” Maradona said in 2018.

Yet amid the noise, Scaloni got stuck in, bringing along his former team-mates Pablo Aimar, Walter Samuel and Roberto Ayala as assistants.

They began a renovation project and injected a much-needed breath of fresh air into the dressing room after four consecutive losses in finals at the Copa America (2014-16) and the 2014 World Cup.

Without Messi, he won four of his first six friendlies to earn him the permanent position.

He played a major role in convincing Messi to rethink his international retirement, which ended after an eight-month hiatus.

They have since created a bond that has allowed a rejuvenated Messi to enjoy his best years with the national team.

After losing the 2019 Copa America semifinal to Brazil, they embarked on an amazing 36-game unbeaten run, including a cathartic 1-0 win against the Brazilians in the 2021 Copa final, to earn their first major title in 28 years.

The accomplishment lifted the pressure off Messi’s shoulders and created another bond, between the team’s idol and their fans.

It was that which arguably gave them the foundation to regroup after their shock loss to Saudi Arabia in their World Cup opener. They have been flawless since.

“I try not to get emotional but it’s difficult because I’m in the dream place for any Argentine. Representing my country is an emotional thing,” Scaloni told reporters after Argentina swept past Croatia 3-0 in their World Cup semifinal.

Yet it has been more than just emotion that has guided Argentina to the final. Scaloni made key changes after the Saudi defeat and had the courage to bring in youngsters Enzo Fernandez and Julian Alvarez, who have been brilliant since.

He has also made crucial changes to his system, using three defenders against the Netherlands and three holding-midfielders to neutralise Croatia great Luka Modric.

Thanks to Scaloni’s acumen, Argentina are on the brink of glory – and while Messi will claim the attention, his coach deserves his share of the plaudits. — Reuters