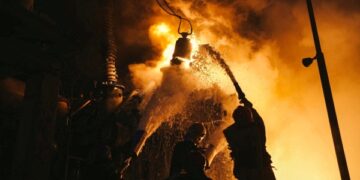 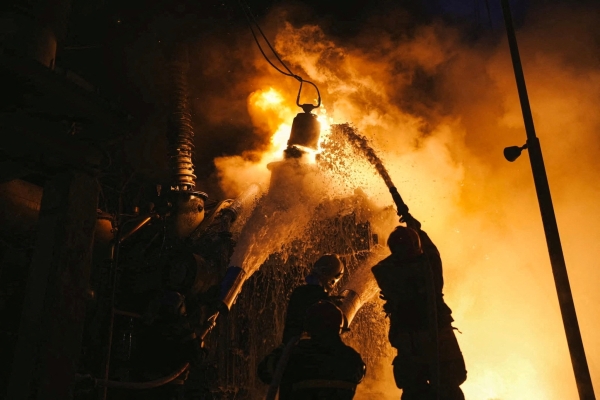 KYIV: Moscow launched a “kamikaze” drone attack on Monday, hitting key infrastructure in and around Kyiv, hours before Russian President Vladimir Putin arrived in Belarus, fuelling fears he will pressure his ally to join a new offensive on Ukraine.

The Ukrainian Air Force said its air defences shot down 30 drones, in the third Russian air attack on the Ukrainian capital in six days and the latest in a series of assaults since October that have targeted the Ukrainian power grid, causing sweeping blackouts amid sub-freezing temperatures. Officials said at least three people were wounded and nine buildings damaged in the Kyiv region.

The Ukrainian atomic energy agency accused Russia of sending one of the drones over part of the South Ukraine Nuclear Power Plant, in the Mykolaiv region. “This is an absolutely unacceptable violation of nuclear and radiation safety,” Energoatom wrote on Telegram. Invading Russian forces currently occupy the Zaporizhzhia nuclear plant, Europe’s largest, near the front line in southeastern Ukraine.

“Kamikaze” drones used in the attacks, are cheaply produced, disposable unmanned aircraft that fly towards their target before plummeting at velocity and detonating on impact. Under the darkness of night, a fire raged at an energy facility in the often targeted central Shevchenkivskyi district, a Reuters witness said.

“I heard an explosion. And in three or four minutes I heard another explosion,” said an old man who works at a guard at a nearby hospital. The Solomianskyi district in the western part of Kyiv, a busy transport hub, home to a train station and one of the city’s two passenger airports, was also hit. Kyiv officials said 18 out of 23 drones were shot down over the city of 3.6 million. “As a result of the attack on the capital, critical infrastructure facilities were damaged,” Vitali Klitschko said on the Telegram messaging app. “Engineers are working to quickly stabilise the situation with energy and heat supply.” Oleskiy Kuleba, governor of the region surrounding Kyiv, said infrastructure and private homes were damaged and that two people were wounded. He said the attack caused “fairly serious” damage and three areas had been left without power.

There has been constant Russian and Belarusian military activity for months in Belarus, a close Kremlin ally that Moscow’s troops used as a launch pad for their abortive attack on Kyiv in February.

Putin’s trip, for talks with Belarusian leader Alexander Lukashenko, is his first to Minsk since 2019 – before the pandemic and a wave of Belarusian protests in 2020 that Lukashenko crushed with strong support from the Kremlin.

“During (these talks) questions will be worked out for further aggression against Ukraine and the broader involvement of the Belarusian armed forces in the operation against Ukraine, in particular, in our opinion, also on the ground,” Ukrainian joint forces commander Serhiy Nayev said before Putin’s arrival. Lukashenko has said repeatedly he has no intention of sending his country’s troops into Ukraine. The Kremlin dismissed the suggestion that Putin wanted to push Belarus into a more active role in the conflict.

The RIA Novosti news agency quoted Kremlin spokesman Dmitry Peskov as saying such reports were “groundless” and “stupid”. Russian troops that moved to Belarus in October will conduct battalion tactical exercises, the Russian Interfax news agency reported, citing the Russian defence ministry. It was not immediately clear when they would start. The 10-month-old conflict in Ukraine is the biggest in Europe since World War Two, killing tens of thousands of people, driving millions from their homes and reducing cities to ruins. Ukrainian President Volodymyr Zelenskiy said the armed forces were holding firm in the town of Bakhmut – scene of the fiercest fighting for many weeks as Russia attempts to advance in eastern Ukraine’s Donetsk region. “The battlefield in Bakhmut is critical,” he said. “We control the town even though the occupiers are doing everything so that no undamaged wall will remain standing.” Zelenskiy on Monday called on Western leaders meeting in Latvia, including British Prime Minister Rishi Sunak, to supply a wide range of weapons systems. Denis Pushilin, Russian-installed administrator of the part of the Donetsk region controlled by Moscow, said that Ukrainian forces shelled a hospital in the Donetsk city, killing one person and injuring several others.

Russia’s defence ministry said over the past 24 hours its forces had shot down four U.S.-made HARM anti-radiation missiles over the Belgorod region, which borders Ukraine, the state-run TASS news agency reported. Reuters could not independently verify the battlefield accounts. Putin casts what he calls Russia’s “special military operation” in Ukraine as the moment when Moscow finally stood up to the U.S.-led Western bloc seeking to capitalize on the 1991 fall of the Soviet Union by destroying Russia. Kyiv and the West say that assertion is absurd and that Putin has no justification for what they see as an imperial-style war of aggression that has put Russia in control of around a fifth of Ukraine. Moscow said on Monday Russian and Chinese forces would hold joint naval drills between Dec. 21 and Dec. 27, involving missile and artillery firing in the East China Sea. While the drills have been held annually since 2012, Moscow has sought to strengthen its political, security and economic links with Beijing in recent months and sees Chinese President Xi Jinping as a key ally in an anti-West alliance.