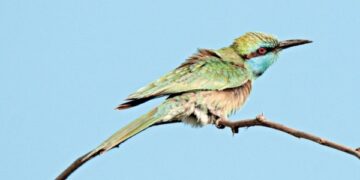 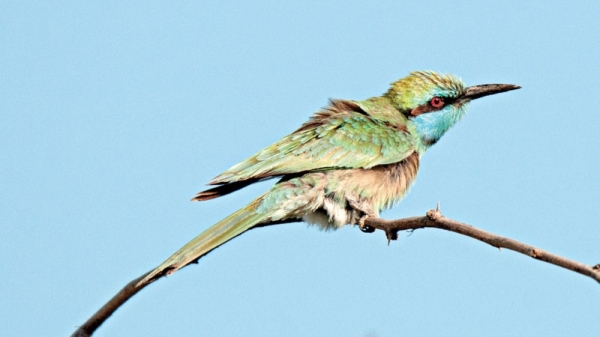 The bee-eater birds become active as soon as the weather changes and the cold winter breeze begins. They can be seen in the farms, gardens and valleys during the season.

The bird got its name from its eating habit of honey-making bees. They are classified as small- to medium-sized birds known for their activity and vitality. They are social birds with long, thin, carved beaks and are erect and alert when standing.

They are among the birds with coloured feathers. They are spread around the world by 24 different species, of which experts recognise 22. They are abundant in savannah areas, open woodlands and desert forests.

Bee-eaters are considered a family of medium-sized birds with beautiful colours and acrobatic movements that they use to pounce on their prey.

To the extent that the similarity reaches the extent of matching, with differences that distinguish each species from the other.

Bee-eaters of all kinds are distributed in a number of places around the world, and they prefer to live in open spaces, such as forest lands and shrub areas that are close to natural water sources, and avoid living in open desert areas.

Studies conducted on more than 15 species of Bee-eaters showed that 60 to 80 per cent of the bee-eater’s diet consists of honey bees and ants in addition to other types of insects, and there are a few other bee-eaters that eat large insects and small lizards.

Some of them eat fish, and they can distinguish between insects with poisonous stings that may be dangerous according to typical behaviours that they possess, and these behaviours are represented by repeatedly hitting the insect on the head and then waving it using their sharp beaks.

Bee-eaters are distinguished from other birds by a set of behaviours, as they can be considered resident birds; that is, they spend most of their lives in the same spatial boundaries in which they originated.

Members of the same family also interact with each other during the foraging period, but each pair of birds has different foraging ranges and may overlap.

When a bird and a bee-eater from the same family meet in the area of foraging, they communicate with each other with enthusiasm, and that is by shaking each bird for its tail, and rarely does one bird forcefully remove the other as a form of hostility.

Studies indicate that bee-eaters’ nests are spread throughout the colony while maintaining a distance between each nest and the other, with no one from outside the colony allowed to enter the nest.

When a warbler uses its beak to wrestle with circling on the ground or on the surface of the water, this may be a defence of the family’s foraging territory. Male bee-eaters guard their females during the marriage period, but one of them may mate with another bird.

Those who are passionate about the hobby of bird-watching in the Sultanate of Oman assert that the natural diet system and the direction of the official authorities in expanding the green area through cultivation and establishing gardens have greatly contributed to preserving this beautiful bird and providing a healthy environment for its breeding.

(Picture by the author)