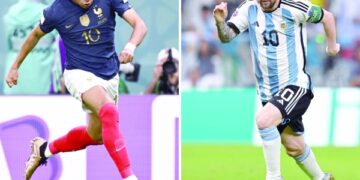 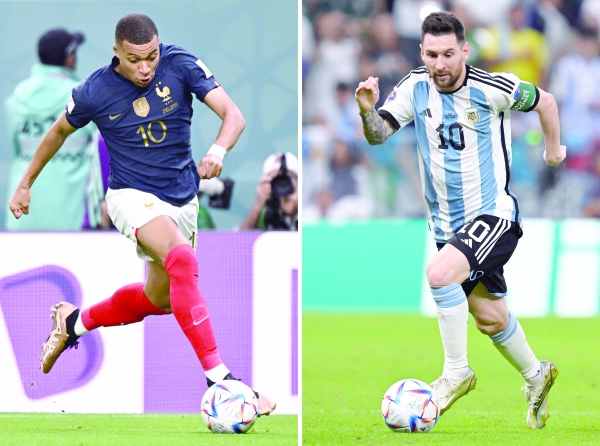 DOHA: After a mesmerising month of upsets, when several brash outsiders threatened soccer’s status quo, the World Cup final will have a familiar feel on Sunday when two of the sport’s super-heavyweights go toe to toe, each seeking a third title.

It seems a long time ago that Argentina were on the wrong side of statistically the biggest shock in tournament history when they were beaten by Saudi Arabia, and France, even with a shadow team, were embarrassed by Tunisia.

Argentina recovered to top their group, had a nervous finale before seeing off Australia 2-1 in the last 16, then blew a 2-0 lead in the 10th minute of quarterfinal stoppage time against the Netherlands before coming through on penalties.

They really found their rhythm against Croatia, sweeping aside a team who had just knocked out Brazil, to march into the final on high.

France looked the best side in the tournament in their first two group games and recovered from the Tunisia blip to turn on the style in beating Poland 3-1.

They were tested to the limit by England in a high-quality quarterfinal, where their clinical finishing proved the difference in a 2-1 win, and though they created little and had to do a lot of defending in the 2-0 semifinal win over Morocco, they always looked like coming through.

Of course, absolutely nothing that has happened in the previous six games will matter a jot for the team who triumph in their seventh at the 88,000-capacity Lusail Stadium.

The storyline underpinning the match for most of the world is whether Lionel Messi can get his hands on the trophy at the fifth attempt to finally lift himself up alongside – never above – Diego Maradona in the hearts of his nation.

If he has not quite carried the team emotionally in the way Maradona did to his country’s second title in 1986, the 35-year-old Messi has certainly delivered magical moments on the pitch, often in key periods.

The final will mark his 26th World Cup appearance, more than any other player, as the stars are seemingly aligning for the mini-maestro.

Sport, however, has a tendency not to follow the script – which is why billions have been tuning in around the world as the likes of Japan, South Korea, Croatia and Morocco refused to accept their assigned “supporting actor” roles and left Germany, Belgium, Spain and Brazil exiting early, stage left.

And, of course, nobody in the French team or coaching staff will be about to sign up to join the cult of Messi, a player who attracts fans by the million worldwide, regardless of who he is playing for.

Their uncompromising defenders, who have not conceded an open-play goal in the knockout rounds, know they must be at their physical and mental peak for every second against a player who so often appears to have drifted out of a game only to suddenly explode into life with often devastating consequences.

France also know that in the rapier thrusts of Kylian Mbappe, the old-school centre-forward instincts of Olivier Giroud and the creative wanderings of Antoine Griezmann they have their own formidable armoury.

Just as Messi delivered that incredible combination of strength and skill to set up Argentina’s third goal in the 3-0 semifinal win over Croatia, Mbappe conjured a brilliant, high-speed dribble that shredded the Moroccan defence to create France’s decisive second in their victory over Morocco.

He and Giroud have nine goals between them in Qatar but it is Griezmann, making an astonishing 74th successive appearance, who has been the point of difference as he drifts and floats into areas defenders don’t like to follow, then delivers intricate and deadly accurate passes.

Having lost to Germany in the 2014 final, Argentina are seeking a third triumph to follow 1978 and ’86 but France are the team of the moment.

Reaching back-to-back finals is an accolade they won’t care much about, but joining Italy (1938) and Brazil (1962) as the third team to retain the trophy would cement them in the French public consciousness alongside the class of ’98 who won it for the first time. — Reuters